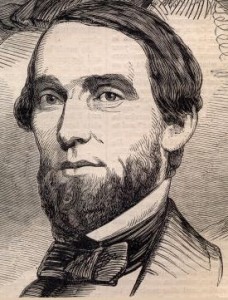 The Alabama State Baptist Convention meets this month in Selma, “a beautiful city on the bluffs of the Alabama river.” During the conference “the principle subject, of course, was the moral culture of our soldiers,” as one participant, identified only as “N. P. Y.”, reports afterward. The same observer offers an account of the main address, delivered by Alabama Baptist president Jabez L. M. Curry (1825-1903). A member of Talladega Baptist Church, Curry is also a politician and an influential Alabamian, having served in the Provisional Confederate Congress. In his speech, Curry discusses the war and the will of God.

It is impracticable to do justice to Mr. Curry’s speech in this report. Only a few points can be given and those with such brevity and so disconnected, that the reader can form but an imperfect idea of the merits of the address.

The speaker stated that God has a purpose in all great civil and political commotions. A common mistake is made tracing their causes simply to physical sources.–There is a cause lying back of all these.

As God has evolved a great religious problem in all previous great revolutions, so he will in us through which we are now passing.

While God is sovereign, and “doeth all things after the counsel of his own will,” he employs human instrumentalities in the accomplishment of many of his great purposes.

It is, therefore, the duty of all good people to watch the indications of Providence and use such means as are in their reach for securing the highest good in the present issues.

It requires more than wise Presidents, Congresses, statutes, armies, munitions of war, and constitutions to secure and perpetuate our independence. The people, laws, ordinances of State, &c., must be permeated with a pure and elevated Christianity. No development of resources, no attainments in learning, no increase of wealth and commercial influence can secure our peace and preserve to us our liberties. There must be a conformity of heart and life to God among the masses of our people–all classes of our people.

Any people without the possession and practice of pure religion, whatever other advantages they may possess, will soon run into anarchy.

Here the speaker illustrated his position by a glowing picture of France. “So,” said he, “will it be with us or any other people who reject or neglect the claims of the gospel. Christianity and liberty are closely allied. Irreligion and anarchy are inseparable.”

He set forth the influence and temptations of the camp–what our soldiers will become without a counteracting religious influence–what will be their influence on their reform as well as the destiny of those who die on the field or in camp. Here the speaker repudiated the infidel sentiments so frequently uttered, that all who die in the noble defence or our country will go to heaven.–None will enter but those who rely on the atoning sacrifices of Christ.

He maintained that christianity makes men better soldiers, all other things being equal. In evidence he adduced the celebrated Havelock and his brave soldiers, “Stonewall Jackson” and the soldiers of Cromwell.

At the close of Mr. Curry’s speech a collection was taken up amounting to $1,625 which, with the collection in the afternoon, makes $2,250 raised during the meeting for the Tract Society in Richmond, Va.

The verbal and financial support of Alabama Baptists for religious literature for Confederate soldiers is broadly reflective of a growing urgency among Southern Baptists for the evangelization of the Confederate Army.