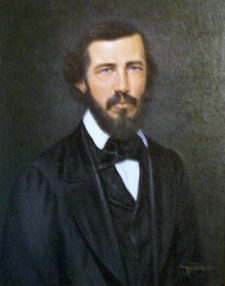 In Dalton, Georgia, the Baptist church (and other church houses) have been confiscated and are being used as Confederate hospitals for wounded soldiers. Today, the Confederate Surgeon General orders the buildings to be returned to the churches, but the use of the structures as hospitals continues until June, at which time the army finally opens a formal hospital facility. The churches, however, do receive rent payments for the use of their buildings.

Meanwhile, on the front lines of the war, the village of Falmouth, Virginia, on the north bank of the Rappahannock River, is occupied by newly-arrived Union forces in preparation of an assault upon Fredericksburg, located across the river. This is the second time Union forces have occupied Falmouth, the first being in the spring of this year. The village’s Union Church–a building used by Baptists, Methodists and Presbyterians as a meeting house (a not uncommon arrangement in small towns of the era)–in the first occupation had been utilized as a United States Army hospital, and now is again seized, to be used as a barracks for troops. In both occupations, the church’s cemetery is used to bury dead U. S. soldiers.

The abolitionist and Methodist and Unitarian minister Moncure Conway (1832-1907) grew up in Falmouth, listening to sermons by ministers of all three Protestant faiths. As a young man in 1851 he preached a sermon in the meeting house, only to be run out of town three years later under threat of bodily injury. In his autobiography, Conway describes the Union Church prior to the war:

The only church in Falmouth was (and is) a “union” house. Catholics and Unitarians were unknown in our region, and I remember no Episcopalian service in Falmouth; but between Methodists, Baptists, and Presbyterians the village had two and sometimes three sermons every Sunday. Now and then some peripatetic propagandist appeared. I remember the impression made on me by a female preacher, the only one I ever heard in Virginia. A good-looking man sat beside her in the pulpit, but uttered no word; the lady—middle-aged, refined, comely—arose without hymn or prayer, laid aside her gray poke-bonnet, and gave her sermon, of which I remember the sweet voice and engaging simplicity. I also remember that a hypercritical uncle, Dr. J. H. Daniel, praised the sermon.

The walls in the vestibule of Falmouth church were thickly covered with caricatures of various preachers and leading citizens penciled by irreverent youth while waiting to escort the ladies home. Probably the contrarious dogmas set forth from a “union” pulpit may have had a tendency to keep clever youths from taking any of them seriously.

Among our elders there was a keen interest in the controversies which I think must have usually characterized the sermons…The discussions in our house about “Calvinism” piqued my curiosity….

How often had I sat in that building listening to sermons—Methodist, Baptist, Presbyterian—occasionally falling under the spell of some orator who made me think its pulpit the summit of the world! How large that church in my childhood, and how grand its assemblage of all the beauty and wealth of the neighborhood!