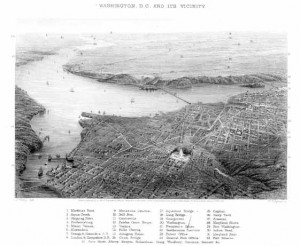 By this point in the Civil War, the Confederacy’s three evangelical denominations–Presbyterians, Methodists and Baptists–are frequently echoing one another when it comes to stoutly defending African slavery and prognosticating ultimate Confederate victory as the will of God. Prominent ministers, writers and journalists of all three denominations also in unison revile the North and U.S. President Abraham Lincoln. Baptists and Presbyterians of the South in particular publish dozens of newspapers, many of which devote considerable space to the war and war-related themes. Their audiences seemingly evidencing an unending appetite for such news and commentary, Baptist and Presbyterian newspapers often borrow liberally one from the other, confident that their respective readers will appreciate the pro-slavery, pro-Confederacy views.

White evangelical Christians of the South often read with self-righteous interest first-hand accounts, from a Confederate perspective, of the corrupted religious landscape of the evil North (the same can be said conversely of Northern Christians’ affinities for reports that disparage religious life in the South). Such accounts are possible because civilian travel between the dueling nations yet takes place on a limited, and typically furtive, basis.

In this war-fueled game of moral superiority, this week’s readers of North Carolina Baptists’ Biblical Recorder are treated to an eyewitness account of a Louisiana Presbyterian minister’s visit to Washington, reprinted from the Christian Observer, a Presbyterian paper published in Richmond. Recorder editor J. D. Hufham believes the story “may not prove uninteresting to our readers.” Indeed, the eyewitness account of religious life in the American capital includes a reference to one of that city’s prominent Baptist ministers.

The religious condition of Washington has sadly deteriorated since the commencement of the war. The political preachers have become more political in their prayers and sermons. You could once hear the gospel in its purity, but he who attends the Church of Dr. Sunderland, or Mr. Noble (a chaplain in the Navy,) or Mr. Brown, who now fills the place of the Rev. Dr. Bocock, will hear tirades upon the wickedness of the South, and harangues upon the glory and power of the pious North. An Elder in Dr. G.—–‘s Church said to me–“religion is dead in the Churches; our prayer meetings have been converted into abolition enclaves, and the best class of attendants have ceased to come.”

Mr. Brown has disgusted his congregation, and the Government was compelled to give him a chaplaincy to save him from suffering. Dr. Gurley, up to this time, has continued to give his people the unadulterated gospel, unmixed with the hypocrisy and humanitarianism of Northern fanatics. A lady remarked to me, “It was awful to hear the prayers of blood and imprecation which were sometimes hurled, in the name of God, at the South!” To “crush,” “confound” and “destroy” were no unusual epithets.

Nevertheless, there are a few good and noble spirits who cry day and night for peace. They are sick of the awful scenes of the wounded and dying which Washington City has so often witnessed. Dr. Sampson, a Baptist minister, on the day of our “fasts,” called the attention of the Union Prayer meeting to it, and desired that God would bless the day to our everlasting good. It met with the approbation of some, but Dr. John C. Smith remarked if this was to be converted into a “secesh” meeting he would come no more, and his majesty has since kept at home to curse the South and invoke blessings on the head of President Lincoln. Although I was once a teacher in his Sabbath School, and a member of his congregation, yet I was afraid to attend his church, lest he should recognize and report me to the provost marshal and have me imprisoned. We do trust the prayers of the few righteous will be heard, and that he who is Head over all things to the Church will grant them and us the speedy blessings of peace. Christ does not delight in bloodshed and the horrors of war, therefore they and we may humbly draw nigh and earnestly pray that this dreadful sacrifice of human life be stayed.

The writer reflects the hopes of many Confederate Christians that “peace Democrats” in the North will yet gain the political upper hand in Washington and force Lincoln to negotiate for peace with the Confederacy.