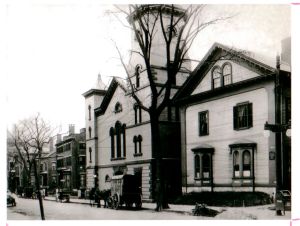 The Union presence, strong in the Southwest following months of steady advances, is contested by the Confederacy. Today, some 22,000 Confederate soldiers attack the 23,000 soldier strong Union fortification at Corinth, Mississippi, but to no avail. The defeat blunts Confederate efforts to drive into Union-controlled western Tennessee.

Meanwhile, September’s bloody Battle of Antietam near Sharpsburg, Maine serves as a call to action for Baptist women of the North. Harriet Eaton, a member of the Free Street Baptist Church of Portland, Maine, travels with fellow church member Isabella Fogg to Virginia to care for soldiers in the Union Army of the Potomac. Eaton and her congregation are no novice to social ministries, having long been involved in the abolition movement. In Virginia, the Baptist church, with Eaton — a widow — as the congregation’s official agent, this month establishes the Maine Camp Hospital Association.

The work is hard. Eaton and her co-workers tend to men with smallpox, diphtheria and other ailments. The presence of women among men in a hospital setting raises awkward issues of propriety. In Eaton’s eyes, some of the surgeons are competent, while others are frauds. Yet the missionary actively seeks to convert soldiers and makes friends among the wounded men, recording her story in a diary. The two women continue their ministry until May 1863, when Eaton returns to Maine and Fogg becomes an agent for the Christian Commission, a broad-based Christian organization that ministers to the needs of soldiers on a large scale. The Baptist-founded hospital continues its work throughout the remainder of the war.

The Free Street Baptist Church’s Maine Camp Hospital is one of many congregationally and/or denominationally-supported organizations that form hospitals and other ministries to soldiers.