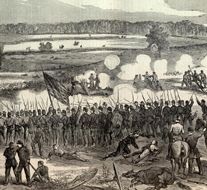 Confederate Gen. Braxton Bragg’s invasion of Kentucky recently approached Louisville and Cincinnati before running out of steam. An effective offensive against Louisville never crystallized, as Union forces maintain control of the city. In regards to Cincinnati, the heroic efforts of Cincinnati’s Black Brigade, a 700+ strong force of free African Americans recruited to help fortify the surrounding countryside, thwarted Confederate attempts to attack the city.

Now concentrated in the larger Lexington area, Confederate forces are attempting to force the border state to capitulate to the Confederacy. Meanwhile, enough time has elapsed since the beginning of Bragg’s invasion of Kentucky to allow significant Union forces to converge in the state. Yesterday, Union Maj. Gen. Don Carlos Buell approached the small town of Perryville, southwest of Lexington at a crossroads, with an army numbering some 55,000 spread across three columns. Nearby some 16,000 Confederate troops awaited for a battle that was surely to come.

Initially, the Union soldiers clash with Rebel cavalry. Today, more skirmishes take place in the morning, but fighting is intermittent. During the afternoon hours the momentum shifts several times, as Confederate advances are repulsed. Only a portion of available Union soldiers battle Bragg’s force. Buell, miles from the battlefield action, fails to send reinforcements to the front until late afternoon, finally checking the Confederate advantage. Outnumbered, Bragg withdraws during the night, retreating toward East Tennessee.

Thus the largest battle in Kentucky comes to an end with a Union tactical victory, leaving 4,276 Union casualties and 3,401 Confederate casualties. The United States retains control of Kentucky for the remainder of the war, and Perryville proves to be the high water mark of the Confederacy in the Western theater of the war.

Meanwhile, the Confederate Baptist, a newspaper of South Carolina Baptists, today reminds readers that loyalty is due the South’s political leaders because in the Bible, “Rulers were entitled elahim, gods, because, as the New Testament informs us, they are ‘God’s ministers,’ ordained for the temporal welfare of the body politic.”

In addition, today’s Confederate Baptist parrots a standard refrain of white leaders of the Confederacy, declaring that African slaves must be prohibited from reading — even the Bible.

The reading of the Scriptures is not essential to the salvation of our slaves.  Faith cometh by hearing, and all the benefits of revelation may be communicated to them by what has always been the great means of conversion, the preaching of the Word.  Oral communication has ever been God’s chosen method of saving sinners.

Against the backdrop of biblical proof-texting to buttress the moral and divine foundations of the Confederacy, the war over African slavery rages on.