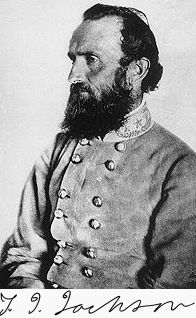 Today Confederate Gen. Thomas “Stonewall” Jackson, beloved of white Southern Baptists (and a Baptist church-goer as a teenager), is promoted to lieutenant general. Thus rewarded for his battlefield daring and bravery, upon Jackson’s shoulders falls ever more the burden of ensuring that the Confederacy emerges victorious over the United States. The general’s exploits are already covered widely in Baptist newspapers of the South, and the praise heaped upon him only grows in the months ahead.

Meanwhile, Confederate Gen. James Ewell Brown (J.E.B.) Stuart leads a calvary force of 1800 into Chambersburg, Pennsylvania, surprising citizens and forcing the town to surrender. Following Confederate Gen. Robert E. Lee’s orders to treat all citizens “with all the respect and consideration that circumstances will admit,” Stuart destroys rail lines and confiscates guns and horses, but treats Chambersburg’s residents respectfully, according to eyewitness accounts. “The troops were well disciplined and polite. Not a single horse or person injured,” comments one town leader.

The peaceful occupation is only temporary, although other Confederate invasions of Chambersburg occur as the war progresses. The news of the successful invasion of a northern city cheers Southerners.

The news, however, is not altogether good further southward, as Confederate Gen. Braxton Bragg, having suffered defeat at Perryville two days prior,  continues withdrawing his forces toward Tennessee in the midst of ongoing skirmishes with Union forces.

Against the backdrop of widespread Northern Baptist praise for U.S. President Abraham Lincoln‘s recently issued Preliminary Emancipation Proclamation, today’s Confederate-related events — and others — receive much attention in the Baptist press of the South in the days and weeks ahead.