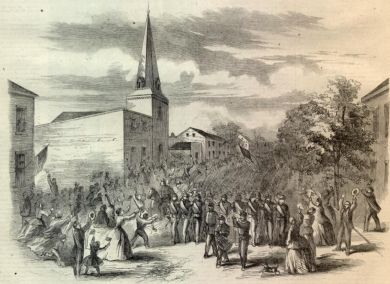 The Battle of Perryville is over and Kentucky is solidly in Union hands. The Confederates have withdrawn from northern Kentucky and the healthy Confederate prisoners left behind in Perryville have been paroled by the United States Army. Now, to the victor falls the task of dealing with sick and wounded soldiers from both sides.

The Union Army, having seized Centre College–previously occupied by the Confederate Army leading up to the Battle of Perryville–this week turns the campus buildings into a hospital for their own sick and wounded. College classes, however, continue on a limited basis, confined to a portion of the campus while the college is utilized as a Union hospital.

The use of the college as a Union hospital follows the transfer of the Confederate ill to nearby Danville Baptist Church, now under Union control. The church’s pews are “broken up and consumed” and the brick building remains under United States control “for a long period,” according to legal testimony before the United States government following the war. As late as 1908, the church yet seeks financial recompense from the United States for damage to church property.