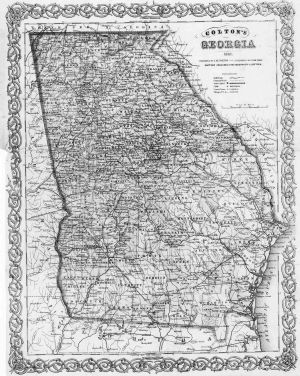 Eighteen months into the war, Southern Baptist mission work is in the midst of a major transition. Foreign mission efforts have ground almost to a halt, due to lack of funding of and communication with the missionaries. Domestic missions, often focused on efforts to evangelize Indians, have severely declined due to the disruptions of war and the shifting loyalties of Indian tribes.

Surging to the forefront of mission efforts is a focus on the heart of the Confederacy: young white men. The protracted war has revealed a crucial weakness, now widely recognized among white Baptists, within God’s chosen nation. Southern white males, serving in large numbers in the Confederate Army, are–collectively–great sinners in need of Jesus.

Assembled in Richland, Baptists of Georgia’s Ebenezer Baptist Association spend much time agonizing over the sins of Confederate soldiers and raising funding to send missionaries to save the young men. The report of the Mission Committee focuses largely on the importance this emerging mission field.

The circumstances which surround us have opened up a new field of domestic labor. We refer to our army. Called from home and all its en[d]earments, cut off from almost every religious influence, surrounded by vice in all its forms, and made to suffer all, and more than all, that humanity can bear, they demand, and should have, a large place in our hearts, and should be made the participants of our greatest religious efforts. We cannot do too much for them. It is not enough that we feed and clothe their bodies. They have souls, and soon it will matter but little if they were barefooted and naked, if their souls are left exposed to the wrath of God. The glory and hope of our country is fast passing away, and while they place their bodies as a defence for us against the invader, shall we stand by and see them fall, regardless of their souls’ best interest? Shall we think more of the pelf of earth, which may soon be taken from us, than the immortal interest of our soldier-boys? We fear that none of us fully appreciate the magnitude of this work, and we would urge upon our hearts the importance of a prayerful consideration of our duties to our soldiers.

Like most other Southern Baptist associations convening this year, no mention is made of the needs of enslaved Africans in their midst. But Ebenezer Baptists do depart from the common refrain of the South as invincible.