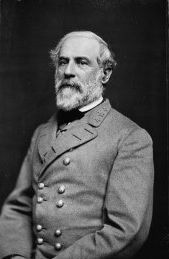 Today a new chapter in the war begins: Confederate General Robert E. Lee and his Army of Northern Virginia begin their first invasion of Northern territory.

The timing of the offensive is not coincidental. The Union’s Army of the Potomac is reeling from a rebuffed attempt to capture the Confederate capital of Richmond. U.S. President Abraham Lincoln seems unable to find a capable general to oversee operations in the Eastern theater. The ineffectiveness of the Union army is breeding growing unrest among both U.S. government officials and the Northern public. In addition, the harvest season is at hand, and a hungry Confederate Army needs food and supplies.

Lee strikes at a time when Baptists of the South are focused on revival and associational meetings. The prayers of many Southern Baptists follow the general as he crosses the Potomac River 25 miles from Washington, D.C. and into the slave state of Maryland, his ragged army of 45,000 marching to the tune of “Maryland My Maryland.” Many Confederate Baptists are united with their nation’s leading general in hoping that the offensive will persuade Maryland’s citizens to revolt against the United States and join the Confederacy.

Panic ensues among the northern citizenry in the vicinity of Washington and the surrounding countryside. Union General George B. McClellan–earlier relieved of his command of the Army of the Potomac following his ineffective leadership in the Peninsular Campaign against Richmond, but on September 2 again appointed as commander of the Army of Potomac and charged with defending the nation’s capital–maneuvers his 87,000-man force to hold the ground between Lee and the nation’s capital, but is hesitant to attack Lee.

The Confederate Army’s bold offensive in the days ahead proceeds largely unhindered as his Army of Northern Virginia marches across Maryland, shadowed but not engaged by McClellan. Northern morale plummets and government leaders seem helpless.

Yet not all goes as hoped. Lee’s belief that Maryland’s citizens would rally to the Confederacy proves unfounded. Rather, the Confederate Army is met with hostility in a state largely devoid of radical pro-slavery citizens. Church and courthouse bells ring in alarm, and local militias are quickly formed to defend against the invaders. In addition, many Confederate soldiers prove recalcitrant; disagreeing that the South should invade the North, some refuse to cross the Potomac in the first place, while desertions become a problem once in Maryland. Compounding the invasion, Maryland’s crops, unlike those of the warmer South, have not yet ripened. Many ravenous soldiers gorge on green corn that makes them sick. While momentum remains with Lee through the second week of the month, his invasion of the North is destined to fail.

For the Baptists of Maryland, these days of peril bring mixed reactions. While some Baptist pastors and congregations in Maryland rally their men to the defense of the state, others (with connections to the Southern Baptist Convention; Baltimore pastor Richard Fuller is president of the Southern Baptist Convention) cheer on the Confederates. This division of sentiment among the state’s Baptists remains throughout the war.