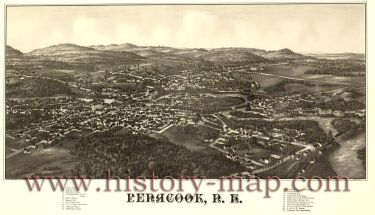 This week, the Union Soldiers’ Aid Society of Penacook, New Hampshire is formed in the town’s Baptist Church. According to the Preamble of the organization’s Constitution:

Believing that it is our duty to do all in our power for the comfort of the soldiers, who are periling their lives in defense of our Government, we whose names are here subscribed do unitedly agree to form ourselves into a society, the object of which shall be to procure funds and adopt such other measures as may be necessary to carry out the design. Said society to continue as long as the exigencies of the case may demand.

The Society functions throughout the remainder of the war.

Ninety-eight names, of women only, were appended to the articles of agreement. There are also recorded the names of seventy-one men who contributed something to the funds of the society, but were not members. Members of the society were assessed twenty-five cents each quarter, or one dollar per year, as provided in the articles of agreement. The meetings were weekly, and nearly all were held at the ladies’ room of the Baptist church….

This society began work immediately, and soon forwarded the first barrel of comforts for the soldiers to Colonel Cross, of the 5th regiment, N. H. Vols., at ” Bolivar Heights,” in September, 1862. Another barrel was sent to the same regiment in October of the same year. After this the supplies were sent to the New Hampshire Soldiers’ Aid society, at Washington, D. C. A printed circular of this society, issued from its rooms at 517 Seventh street, states :

“It is purely a charitable institution. There is no diversion of its funds from its special object. Its officers and members serve without charge, and what is sent to the society finds its way at once to the sick and wounded, unchecked and undiminished.”

….In November and December, 1862, three lots of supplies were sent … In 1863 four lots of supplies were sent to the ” Christian Commission,” at No. 5 Tremont Temple, Boston. A circular of this commission states that its aim is the “benefit of both soul and body” of the soldiers. Its agents in the field are “Unpaid volunteer delegates, ministers, and laymen, enlisted from all evangelical churches,” and the plan was to distribute stores by these delegates. In 1864 the supplies from the Union Soldiers’ Aid society were again sent to the New Hampshire Soldiers’ Aid society at Washington. The last year of the war, 1865, two lots of supplies were sent to Miss Harriet P. Dame, an army nurse from Concord, and by her distributed…

….In all there were forwarded by this society thirteen barrels or boxes of supplies, containing the following articles: 71 bedquilts, 5 pairs sheets, 30 pillows with sacks, 5 pairs pillow-cases, 17 bed sacks, 223 shirts, 128 pairs drawers, 215 pairs stockings, 5 coats, 1 vest, 1 pair pants, 8 dressing-gowns, 59 pairs slippers, 157 handkerchiefs, 77 towels, 1 pair mittens, 69 housewives, 7 bottles wine and cider, 100 pounds dried apples, and a large quantity of lint, bandages, books, papers, sermons, almanacs, etc. The freight on these amounted to $50. The society also sent $50 to the Christian commission; $180 to Miss Harriet P. Dame, and $200 to Rev. Joseph C. Emerson, chaplain of the 7th regiment, N. H. Vols. This last was just before the close of the war, and was not all needed. Mr. Emerson returned $100 to the society June 4, 1865. The records of the society show that they purchased materials, mostly woolen and cotton cloth and yarn, which cost $615.50. These materials were made up into supplies for the soldiers by the women of this society. This shows clearly the spirit of the women of ’61 in this village.

Much of the same work was done by local societies all over the state and throughout the whole North. The value of the supplies sent out, together with the cash contributions, amounted to about $2,200.

The funds of the society were obtained from membership dues, from general contributions by citizens of the village, and from the proceeds of a grand fair held at the Baptist church, January 1, 1864. Dea. H. H. Brown and his wife were at the head of the committee of management, and were, with the other members, eminently successful in conducting the largest affair of the kind ever held in the village. The receipts were $1,065.64; expenses, $129.19; leaving the net proceeds $936.45.

This society was dissolved at the close of the war in 1865, leaving a record which is a credit to all of its members and an honor to the village.

The supplies referred to as “housewives” are not the actual wives of soldiers (it would have been rather difficult to pack women in a barrel and ship them to the war camps!). Rather, a “housewife” is “a sewing kit that contained scraps of fabric, brass pins, needles, thread wrapped on a piece of canvas, bone buttons, paper backed tin buttons, a small pair of scissors, and sometimes some matches and a candle.”