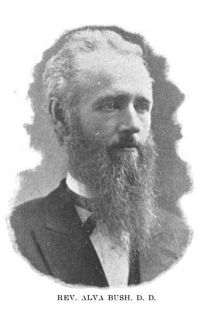 Today, Iowa’s Cedar Valley Baptist Association assembles at Waterloo. While the war is uppermost in the minds of the delegates, the issue of higher education is also a concern of some individuals present.

At the seventh anniversary of the Cedar Valley Baptist Association held at Waterloo, September [26], 1862, H. I. Parker presented the prospects of a school in Osage, Iowa, and Revs. Fulton, Alva Bush, C. B. Smith, R. P. Keyes, L. T. Harmon, and H. I. Parker, were appointed a committee to report upon the matter, who reported, in substance, as follows:

That the people of said town having proffered commodious and comfortable buildings, free of charge, for the establishment of a school, therefore,

Resolved, That we fully approve the acceptance of said buildings, and pledge our hearty co-operation in the execution of the enterprise.

Rev. Alva Bush, former pastor of several Iowa Baptist churches and now a professor at Upper Iowa University, is the man with the vision for an Iowa Baptist school. The citizens of Osage, meanwhile, are seeking to establish a higher education academy for young people. With the approval of the Cedar Valley Association in hand, Bush in the following months secures usage of the “new jail” and courthouse in Osage for classroom space. On Monday, January 12, 1863, Bush opens the first term of the school, named the Cedar Valley Seminary, and functioning as an academy. Seventeen boys and fourteen girls are present, and they bring their own chairs. The curriculum is broad-based, rather than exclusively theological (as is the case with many Baptist schools at this time), and students study a wide range of subject matter.

Under the presidency of Alva Bush, the seminary / academy survives the war and prospers, constructing its own facilities. The school produces students of various professions, including educators, writers, doctors, businessmen, scientists and lawyers. The Cedar Valley Seminary remains open until 1922, when the building is turned over to the Osage Public Schools and used for public schooling for the next 44 years.

Today, the former Cedar Valley Baptist Seminary houses the offices of the Mitchell County Historical Society and a museum. The former academy stands as a testimony to how some Baptists of the North worked with local governments in the task of educating regional young people in the acquisition of the broad knowledge and skills needed to prepare young men and women for professional careers of various kinds.