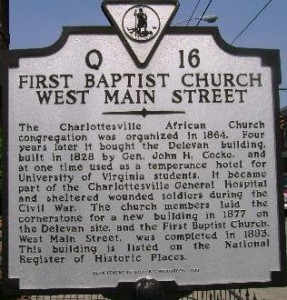 In Virginia, an increasing number of blacks, both free and enslavesd, are experiencing the evolving nature of the Confederacy’s military struggle against Union forces. Nervous slaveholders are keeping an ever tighter rein on their slaves in an effort to prevent insurrections, even while publicly voicing confidence (against abundant evidence otherwise) that Southern slaves are too loyal and happy to ever consider running away. Meanwhile, Confederate officials, against the wishes of slaveholders, are forcefully impressing blacks into military service (in non combat duty) in defense of the South. In addition, many free (of the relatively few free blacks in the Confederacy) suddenly find themselves unwillingly forced into military service.

Against the backdrop of changing dynamics of racial relations, Charlottesville and Albemarle County’s blacks, both free and enslaved, last month had appealed to the First Baptist Church of Charlottesville (whose membership included about half of the county’s black population) to start their own congregation in the city. The request was made courteously and politely, indicative of the heightened tension between whites and blacks. To allay white fears, the new church would remain under the authority of First Baptist Church and retain the services of John T. Randolph, a white Baptist minister, as pastor.

Assured that a white pastor would preside over the proposed congregation, white members, after some weeks of discussion, agreed to the plan. And today, Charlottesville African Baptist Church is born.

Black church members, however, in reality are exercising their autonomy. Forming the congregation is the first step. The next step comes two months down the road, when Randolph is rejected by black members.  White members of the First Baptist Church respond with dismay, warning that the black congregation must remain under “the care and control of the [white] church.”

Black members are thus now on the road to full separation. In1864 the separation from the First Baptist Church is completed when the African congregation moves into the basement of the Delevan building (previously a temperance hotel and earlier in the war used by Charlottesville General Hospital) and becomes known as the Delevan First Baptist Church. In 1867, a second African Baptist congregation, Mount Zion Baptist Church is birthed by some of the original black members who initially sought a separate congregation from whites.

Former slave William Gibbons is chosen as the new pastor of Delevan church, and in 1883 the congregation finishes construction of its first building (on West Street) and becomes the First Colored Baptist Church of Charlottesville (and later First Baptist Church West Street).