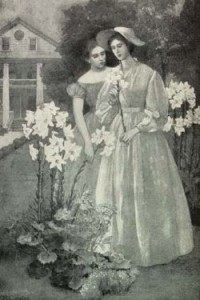 While women in the North have for decades been active in the abolitionist movement and generally have some voice in social reforms, white Southern women live in a male-dominated society where proper gender roles are reinforced by a literal reading of the Bible. Although the war-time absence of many Southern men from home and church allows opportunity for women to assert themselves in a more forceful fashion, religious, social and cultural gender norms yet hold sway. The life’s purpose of woman, in short, is to remain domesticated, docile and pleasing to her husband. In this way she is to serve God, society and nation. The popularity of finishing schools for young women simply reinforces the female responsibility to be subservient to males.

And yet today’s North Carolina Baptist Biblical Recorder features an pseudonymous-penned editorial about Southern women, offering praise for a new and “clever idea” regarding women’s role.

Or is it such a new idea after all?

A new fashion has of late been inaugurated among the young ladies, which has so impressed me, that I feel constrained to make a few remarks thereon. It may be an original idea among us, though if it is, and there is any acuteness in it, some wise one will be sure to say it came from Virginia or South Carolina, for poor old North Carolina gets but little credit for bright ideas, or great and good deeds.

The fashion I speak of is this: many of our young ladies who have long since graduated and gone into the world, playing their part in life as beauties and belles, have returned to their tasks, and have again resigned themselves to tutors and governesses.–It is a clever idea, no matter whence it emanated. They probably graduated at fifteen or thereabouts, and now, at ages varying from twenty to twenty-five, they return to school with minds much better prepared to understand the signification of their text books, than when they first sat down to study.

It has been an error with us that our young ladies have left the school room at too early an age, and plunged into the gay whirl of society. After a brief experience in some of life’s duties, they can see where-in they are most deficient and those who design again to study, can now remedy the errors of their early, and perhaps, hasty course. Their minds will now be undisturbed by those interruptions, which in a different state of civil and military affairs, might impede their progress. They have wide opportunities, which, if properly improved, will render them not only the charm of the circle at home, but the pride of their future husbands!

For other reasons, the present is a most opportune moment for young ladies to devote themselves to study. We are about free from the style of reading that has destroyed the taste of so many people. There is none of that wild, poetic, supernatural, sentimental, unsubstantial, and abominable cheap literature constantly arriving amongst us to fill up all hours of idleness or leisure, and those who have lived on it, now pine for some other aliment, since they may have been long enough separated from their idol–novels,–to be able to appreciate some enjoyment more truly intellectual and instructive.

There are no parties to attend–no ball-dresses to desire and superintend, no new finery to stimulate either envy or the purse–and there is no way in these young ladies can so happily dispose of their time and surplus of Confederate money which their papas are so unwillingly holding,–no means by which they can so beautifully and agreeably “renew their youth”, as by returning to scholastic pursuits, and making themselves such women as the whole Confederacy may one day delight to honor.

In their mature years may successfully be cultivated, gifts whether for prose, poetry, music or art, and it is only from the development and cultivation of older minds, that we may hope for an original literature, and an exhibition of individuality in art or science.

To some, who have not thought of this means of beguiling the time of its tedium, it may be a welcome suggestion. There are very many who have nothing to do, and do nothing. At the present, how woful is their lot! The old list of admirers is long since worn out, and unless they chance to reside in the vicinity of some military encampment, they languish in solitude and “waste their sweetness on the desert air.” This idea of becoming a student again will prove a pleasant, nay, delightful means by which to fill the interregnum between a past and future reign of conquests. It will supply new charms with which to fascinate, when those that hitherto have won admiration, shall, from a long season of beauless disuse, become stale and unattractive.