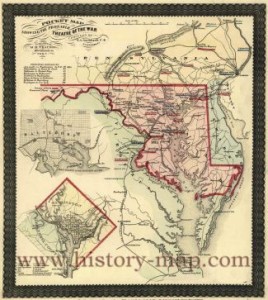 In the border state of Maryland, Baltimore’s First Baptist Church–according to an account two decades following the war–weathers the war years quite well, although sadness of an unusual variety marks this day.

Another season of refreshing visited the Church in 1863, resulting in the addition of a small number by baptism, by letter and by restoration. An interesting event of the year was the ordination of three young brethren to the ministry, viz: Alfred L. Bond, J. Q. A. Rohrer, and I. F. Stidham. The two former had consecrated themselves to Foreign Missions. They completed a thorough course of preparation for their work, and with their devoted wives, embarked as missionaries, the one for China and the other for Japan. They sailed from New York, August 3, 1863, in the ship “Edwin Forrest,” which was never heard from, and was doubtless lost.

For several years, during the war between the States, while strife was prevalent without, there was no conflict within the Church. There were different views entertained among the members in relation to political matters, yet this subject never disturbed the minds or actions of the members in their Church capacity. Peace and harmony marked all their proceedings. Candidates were received and baptized, members were received and dismissed by letter, wholesome discipline was maintained, without any reference to the contending elements abroad. During these troublous times, 1861 to 1865 inclusive, 134 additions were made to the membership. During 1866, there was a powerful revival; 150 were added to the Church, of whom 111 were baptized–the year was one of unexampled prosperity. The young men of the Church organized themselves a “Home Mission Society,” and instituted a branch Sunday School in a destitute portion of the city.

Many other institutional Baptist accounts of the war written in the decades following the great conflict offer similarly untroubled accounts–or, in the case of Southern Baptist writers, portray total and complete devotion to the Confederacy–of life during the war years. Such writings are wishful and fanciful interpretations of the Civil War, contributing to the creation of self-serving mythologies that by the 1880s and following supplant realities and re-shape regional consciousness.