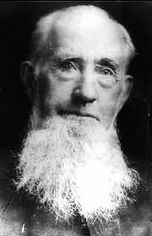 The foray marks Quantrill’s westernmost advance. Previously confining his raids in an area from western Missouri to the Kansas border, the guerrilla leader now makes a bold strike far beyond the state line. Throughout the morning hours, Quantrill and his 294 men plunder and pillage Lawrence and the surrounding area, killing many citizens.

Certain persons in Lawrence are on Quantrill’s hit list, including Jacob Ulrich, a German Baptist minister, and Abraham Rothrock, an elder in Ulrich’s church. The two men are neighbors, and both are abolitionists; Ulrich’s anti-slavery reputation is especially well-known. Warned of the impending attack, Ulrich and his family flee and hide in the nearby woods, as does Rothrock.

The raiders set the Ulrich’s house and barn on fire, but the family saves the house once the outlaws ride away. The families survive the attacks, although Ulrich, already a sick man, dies four months later, on December 22.

In 2001, Ulrich’s great-grandson Henry Flory speaks of the events of that day as related to him by his grandmother, Suzanah Flory, Ulrich’s daughter.

“By the time they got close to Pleasant Grove, a lot of Quantrill’s men were drunk, and I guess you could hear them coming from a mile away.

I remember my grandma saying that her mother, Mary, grabbed a pan of bread that was rising and they all ran into the woods and hid behind a rock wall about 80 yards west of the house ….

My grandmother said they had a brand-new, horse-drawn threshing machine in the barn when it burned ….”

By the time the outlaws leave Lawrence, some 180 Kansans are dead.