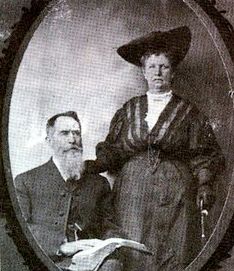 Jacob S. Wood, a new enlistee in Company E, 4th Missouri Cavalry (Union) is today ordained as a Baptist minister. Born January 6, 1839, in Page County, Virginia, Rev. Wood musters into his unit on October 30, 1863. Serving throughout the war, Wood sees action throughout much of the Confederacy, from Texas in the west to Kentucky and Tennessee in the east. Surviving the war, he musters out on July 5, 1865.

Following the war, Wood marries Sarah K. G. Elliot and serves as a Baptist preacher for many years. The couple have two children in due time. For 32 years Jacob serves churches in northwest Missouri. Failing health then leads Jacob and Sarah to move to northeast Wyoming, where he establishes the Alva Community Church and Baptist Church in Hulett.

In 1911, following more than fifty years of ministry, the couple continue their trek westward, moving to California. Jacob founds a mission as a part of the Santa Ana Baptist Church, before resigning from the ministry at age 83.

Jacob Wood’s life represents one of the stories of the nearly three million men who fight for either the United States or Confederacy during the American Civil War. Many do not survive, but of those who do survive in relatively good health, Jacob is one of many former soldiers who–for various reasons–eventually succumb to the call of the West and become early citizens of an area of the country which had not been directly impacted by the war.