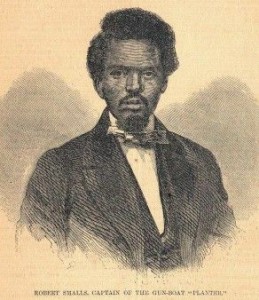 South Carolinian Robert Smalls, a former slave who had worked in Charleston’s shipyards, became a hero to the North in May 1862 when he commandeered the Confederate transport CSS Planter in Charleston Harbor and steered the ship to safety and freedom for himself and his crew of slaves and their families, behind nearby Union naval lines. Since that time, the Baptist layman has become a much-besought speaker in the North, a Union informant regarding Confederate naval defenses, an early advocate for recruiting blacks into the Union Army (the Union’s 1st and 2nd South Carolina Volunteer regiments are a direct result of Small’s recruitment efforts), and a pilot in the Union Navy.

Today Smalls, piloting the USS Planter (formerly the CSS Planter) is caught in the crossfire of a naval skirmish. The ship’s commander, Captain Nickerson, decides to surrender. Smalls, however, refuses to give up, knowing that to do so would result in the treatment of his black crewman as prisoners of war and, quite possibly, execution. Overriding his commander’s orders, Smalls pilots the ship to safety. Days later, in honor of his bravery, Smalls is named the new captain of the Planter, becoming the first black captain of a United States government naval vessel. 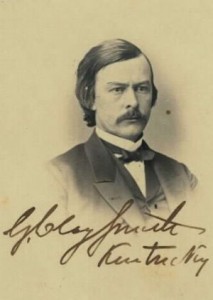 Another Baptist laymen, Green Clay Smith of Kentucky, today resigns his military post. Elected to the Kentucky House of Representatives for the 1861-1863 term and to the U.S. Congress in 1862 (effective March 4, 1863) as an Unconditional Unionist (a loosely organized political party comprised of Southern Democrats loyal to the Union and elements of the old Whig Party, and committed to the defeat of the Southern Confederacy at all costs), Smith is a vocal advocate of freedom for slaves. Concurrently with his political posts, the Kentuckian has served in the U.S. military, first as a colonel in the Fourth Regiment of the Kentucky Volunteer Cavalry (April 4, 1862) and then as brigadier general of the unit (July 2, 1862).

From today to the end of the war, Smith focuses solely on the political side of the Union war effort, supporting the effort to amend the United States Constitution to make slavery illegal. On April 19, 1865, Smith serves as one of Abraham Lincoln‘s pallbearers.

From 1865-1866 Smith is chairman of the Committee on Militia, resigning from the post in July 1866, when President Andrew Johnson appoints him Governor of Montana Territory, in which capacity he serves from 1866 to 1869. Upon his resignation, he moves back to Washington and then Kentucky, is ordained as a Baptist minister, and from 1870 to 1890 serves as pastor of a number of Baptist churches in the state, including First Baptist Church of Frankfort. Smith also serves as moderator of the General Association of Baptists in Kentucky from 1879 through 1887. During this time Smith is a vocal advocate of Prohibition and in 1876 is the candidate of the National Prohibition Party in 1876 for President of the United States.

Following his pastorate at First Baptist of Frankfort, Smith moves to Washington, D.C. where he pastors the Metropolitan Baptist Church from 1890 until his death on June 29, 1895. Smith is buried in Arlington National Cemetery, on the grounds of the former plantation of Robert E. and Mary Lee.