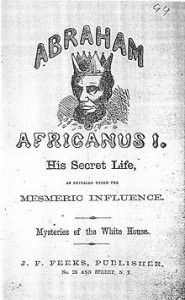 As the year draws to a close following months of major Union victories on the battlefield, Peace Democrats–popularly known as “Copperheads” due to the pennies they wear as an identifying symbol, and characterized by their opposition to the war and demands for an immediate peace with the Confederate States–have lost their political momentum. Having reached a zenith during the summer’s New York City Draft Riots, Peace Democrats suffered a defeat in October when a Copperhead candidate lost the race for governor of Ohio. Now they train their hopes on 1864, hoping for Union Army setbacks that will rekindle Northern opposition to Abraham Lincoln and the Republican Party.

Confederate leaders, meanwhile, continue their efforts to aid the Copperhead movement from afar in hopes of enticing a broader swath of Northerners to agitate for a peace agreement that would leave the Confederate States–and her institution of African slavery–intact.

Southern Baptist editors likewise attempt to stoke the fires of the Northern peace movement, as reflected in an editorial in today’s North Carolina Baptist Biblical Recorder:

How much soever the people of the North and South may differ in the views and feelings with which they are prosecuting this struggle, and how much soever they may be divided among themselves into rival and contesting sects and parties, we imagine that there is one desire common to them all, one prayer which is unceasingly offered up by the masses of the two peoples who are now waging war to the death against each other. That desire is for peace; that prayer is for peace. Strange that war can continue under such circumstances–so any one would say who looks not beyond the surface of things. But if we examine the causes which prompt these desires for peace and the various and opposite kinds of peace so ardently longed for, it will not appear surprising that the conflict has waged with unremitting fury for nearly three years, or that it should yet be indefinitely protracted.

Among our enemies are some who were at first opposed to the war and only gave their consent to it as a means of restoring the Union. They sadly remember the past grandeur and glory of their country, its wealth and power, its vast extent, its undeveloped resources, its perfect freedom and its bright promises for the future; and they pray for peace on the basis of reconstruction and a restoration of the old status of the government and people. Strangely blind to the difficulties in the way of accomplishing such an end, they pray on and fight on, submitting to privations and to a despotism which takes from them every cherished right of freemen.

Then there are those who once grew rich by Southern trade. They look sadly over their well-filled shelves and blank ledgers, and remember the throng of Southern customers, so ready to buy, so prompt to pay, and they long for peace. But it is peace on the basis of reconstruction which shall bring back their departed trade and prosperity.

There are those, too, who have grown rich during the war. They fear to trust their ill gotten gains to the uncertain chances of war, and they pray for peace in order that they may secure their wealth and spend the remainder of their days in luxury and ease.

The politicians who have entered the army as a stepping-stone to future advancement, have had sufficient experience in military life and pray for peace, that they may return to less dangerous campaigns in the field of political intrigue. This sort of strategy better accords with their genius and previous training and its triumphs wold be more pleasing to their ambition.

The rapid abolitionists also desire peace. All of them, from Lincoln and Seward and Beecher to the humblest dog of the pack, pray for peace, but such a peace! It is one which shall bring destruction to the South. They pray for the hour when we shall be entirely subjugated, our slaves freed and made our equals if not our masters, our property confiscated and we crouching before them in abject dependence, begging for such crumbs of mercy and favor as their devilish hearts may deign to grant us in the hour of their exultation. Such is their prayer for peace.

Here and there among the people of the North are those who were opposed to the war from the beginning and who have grown more weary of it as it has dragged its slow and bloody length along, and who now pray for peace to deliver them from the evils and miseries which they now experience and from those which are yet to come if the war goes on.

Who in our own country does not desire and pray for peace? The soldier on the long, weary march, by his camp fire, on the lone out-post, in the dreary hospital, or amid the terrors of the battle-field mangled and dying prays that the war may end. In the sanctuary when the people of God are met for worship, around the family altar where loved ones are sadly missed, in the deserted places of business, in the cabinet–all over the land there go up daily prayers for peace. The mother who has sent forth her son to answer the calls of her country, the wife whose husband has fallen in battle and who is left a prey to merciless speculators, the father who has given up his boy the staff and stay of his declining years, the refugee, driven from the comforts and endearments of home to find an abode among strangers, the prisoner in his lone cell, far away among enemies,–all, all pray for peace. The great heart of the nation torn and bleeding in this unnatural struggle longs for peace and repose. But these prayers are for a peace which will secure our national independence. Nothing else will satisfy the petitioners.

Notwithstanding these things the war still goes on, and there is, to the human eye, no prospect of its speedy determination. Will any of these prayers be answered? If so, which of them? May it not be, that the war will go on until the people of both sides are willing to give up their own preferences and selfish ends and submit entirely to the will of God? If the christians of the Confederacy could reach this point of entire resignation to Him who rules the nations of the earth, should we not have peace at once?

Unacknowledged are the Southerners of the enslaved class who are desperately praying that Lincoln and the abolitionists will conquer the Confederacy–and who for months have been fleeing to freedom behind Union Army lines when opportunity arises.

The thoughts and prayers of enslaved Southerners aside (blacks being incapable of intellectual acumen and independent Christian thought, in the minds of most whites), many white Southerners who yet hold the Confederacy dear (and growing numbers do not as the brutal war drags onward) believe that a resurgent Northern peace movement in the U.S. presidential election year of 1864 is their best hope for derailing Lincoln and his abolitionists and preserving the slave-based Confederacy.