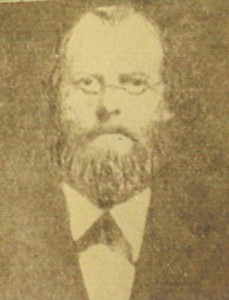 Jacob M. C Breaker (1824-1894), born in South Carolina, is a leader among the state’s Southern Baptists. Like most prominent Southern Baptists, he is a member of a wealthy slave-owning family.

In Jacob’s childhood years his father, Lewis Frederick Breaker–a wealthy merchant and plantation owner and a deacon at First Baptist Camden, South Carolina–moved the family from South Carolina to Key West, Florida where he established new business interests. With the family’s finances secure, Lewis wished for his son to become a Baptist minister–rather than a sea captain, as many Breaker men had been or were. To this end, Lewis sent a teenage Jacob back to South Carolina to live with a Baptist cousin, the Rev. Charles Middleton Breaker.

In 1840, at the age of 16, Breaker made a profession of faith, was baptized, and declared he was called to the ministry. In 1841, the young man enrolled at the Furman Institute, the tuition paid by his family. Yet tragedy struck the following year as both Jacob’s parents died in Key West. Family money allowed Jacob to continue his studies, however, and he graduated from Furman in 1846.

Jacob’s education, family planter background, aristocratic lineage, and financial means paved the way for a life of significant pastorates in Southern Baptist life and a stint as a leader within the South Carolina Baptist Convention.

Upon graduating from Furman, in 1846 Breaker began his pastoral ministry as assistant pastor of Chesterville Baptist Church in South Carolina. This initial pastorate lasted for only a short while as the aspiring minister was soon called to pastor the First Baptist Church of Greenville, a notable congregation. Several significant events happened in the life of Jacob Breaker while he pastored this congregation.

Firstly, soon after his arrival, the members of Greenville FBC “Resolved that Elder Breaker be requested to devote such portion of his time as he may find convenient to the instruction and spiritual benefit of the coloured brethren.” While Greenville’s slave population was much lower, percentage-wise, than in other of the state’s cities, the church had numerous black members (primarily slave, with some freed persons), and in recent months there had been disputations among black members and between blacks and whites. Breaker apparently handled well his responsibility for the welfare and direction of the church’s black members.

Secondly, Breaker soon found himself the center of controversy. On October 11, 1847 “the male members of the church met in conference at Brother J. M. Roberts to take into consideration certain reports which were current in the community to the effect that Elder J. M. C. Breaker during a visit to Caeser’s Head mountain some time last summer was guilty of intoxication.” Whether guilty or not, the charge of drunkenness weighed negatively on the young minister’s ability to effectively pastor the congregation.

On a more positive note, while pastoring in Greenville Breaker married Emma Juliette Juhan in 1848, his sweetheart of six years.

Yet Greenville proved but a brief pastorate, the briefness perhaps accelerated by lingering concerns regarding the charge of drunkenness. Seeking a new beginning, Breaker left his home state in 1849 to pastor the First Baptist Church of Newbern (or New Bern), North Carolina, a sizable congregation. In addition to pastoring the congregation, Breaker served as the president of the Newbern Female Seminary from 1851-1853.

The town of Newbern was the second oldest in the state, and had served as the first state capital following the American Revolution. It was a city of wealth, its economy largely driven by the labors of thousands of slaves, with blacks outnumbering whites since about 1800. Yet many free blacks also lived in Newbern, easily making the city home to the largest percentage of freedman in North Carolina–13% by 1860.

Closer proximity to plantation life, however, apparently suited Breaker better. Such a large percentage of free slaves was foreign to the minister. He longed to return to the aristocratic South Carolina life of his youth. When he was offered a ministry “in my dear old native state,” he gladly returned to South Carolina in 1854. “Highly satisfactory” was his description of the opportunity to move to Beaufort District (County) to pastor the Euhaw Baptist Church of Grahamville, South Carolina, a village of seaside summer homes for wealthy slave-owning planters. Prior to the war, the county had been one of the ten richest counties in the United States, its wealth derived from the laborers of tens of thousands of slaves working on large plantations.

Living “near the seaboard, and among a people whose social characteristics are identical to my own” was pleasing to the up-and-coming minister. Indeed, the Euhaw church was itself notable, as it was the second oldest Baptist church in the South (First Baptist Charleston having been the first), established in 1686 on Edisto Island, later relocating to the village of Grahamville.

Six years later the family moved to nearby Beaufort, South Carolina, still in Beaufort District, where Breaker pastored the First Baptist Church until 1859. White citizens comprised but a small proportion of the county’s population, a fact reflected among the church’s membership. In 1857 alone, Breaker reported baptizing 565 persons, all but eight of whom were black. By the end of the year, the membership stood at 3,511, all but about 100 of whom were black (almost all, and perhaps all, being slaves). First Baptist Beaufort was “probably the largest church in the world,” Breaker noted at the time.

During this time Breaker wrote extensively, having numerous tracts published as well as articles in religious newspapers, focused primarily on the Baptist faith, church polity, and the Bible.

Despite his pastoral success, Beaufort held heartbreak for Jacob and Emma, as their two daughters died there in 1859 from a plague.

Perhaps again needing a new beginning, later in 1859 Breaker left Beaufort to become the pastor of First Baptist Church of Columbia, South Carolina. He was serving in this capacity when the church hosted the South Carolina secession convention, the first secession convention in the South and the meeting that led the way to the formation of the Confederate States of America. When secession delegates convened at First Baptist Columbia on December 17, 1860, Breaker opened the convention in prayer and then presided over the day’s meeting in which the state’s secession convention delegates voted 159-0 to break away from the non-slaveholding states of the North.

In July 1861, Breaker preached the Introductory Sermon at the annual gathering of the South Carolina Baptist Convention.

This week a letter from Dr. Breaker is published in the South Carolina Confederate Baptist, a newspaper which he founded and edits (his editorial tenure lasting throughout the war). The letter extols the Southern Baptist Domestic Mission Board’s ministry among the South’s “noble, suffering soldiers” and their families.

Without disparagement to any of our State denominational societies, all of which are doing a noble work, it is but justice to the domestic mission board, at Marion, Alabama, to admit that its importance and usefulness commend it to the special regard and support of our churches and brethren throughout the Confederacy. It is doing a work which is indispensable to the prosperity of our religious and denominational interests and a work which no other society can do, or is attempting to do. As evidence of this, it has recently made the appropriation of $1000 to each of the five Baptist papers in the Confederacy, to aid in their distribution in the army, and it is rendering valuable and timely aid in the support of feeble churches at important points throughout the country, and is thus sending comfort and encouragement into the hearts of our noble, suffering soldiers, by showing a proper care for their families at home. Besides this, it is making the whole Confederacy its field and sending the Gospel to the soldiers of those States, which on account of the inroads of the enemy, are not able to make provision for the spiritual wants of their own soldiers. As the appointed agent of the whole denomination in the Confederacy, it has good reason to expect, that while our brethren are contributing so liberally to the support of our excellent local organizations, they will make prompt and liberal responses also to its pressing claims.

Breaker’s pastorate at First Baptist Columbia comes to a close when Columbia falls to the United States Army in 1865. Afterwards, he pastors in Spartanburg for two years, then, like many white Southerners once well-off, travels West in the post-war years. From 1868 to 1894, he pastors churches in Missouri, California and Texas. During this time, however, Breaker’s convictions extend beyond his Southern sympathies, as he is a life-time member of three Northern Baptist entities: the American Baptist Missionary Union, American Baptist Publication Society, and American Bible Society. Southern Baptists have no comparable membership societies, their missionary and (halting) publishing efforts being convention-based instead.