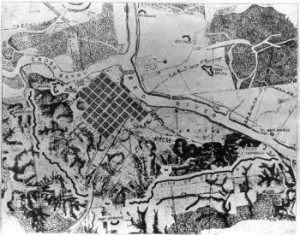 By the waning days of 1863 the trickle of Confederate deserters has turned into a relative flood. Government officials and military officers alike grow increasingly concerned that the South will not have enough manpower to overcome the superior numerical advantage of the United States.

Most deserters who manage to escape recapture spend the rest of the war with their families, or, in order to avoid detection, remain in hiding. Madison Freeman Price of Texas, however, is an exception.

Price, apparently, as were his parents and siblings, is a member of the Indian Creek Baptist Church in Smith County, Texas (church records are incomplete, but Price’s writings voice his Christian faith and reference the church in a familial manner). Earlier in the war Price had been serving in the Confederate Army in Hubbard’s 22d Infantry alongside brother John M. At some point, however, the Price brothers apparently desert from their unit.

Desertion is by no means unusual by now in Texas: the southwestern states experienced a rash of desertions in late 1863, so much so that in early November, Confederate officers in the West had begun cracking down on deserters, seeking to stem the outflow of soldiers. November 5 served as the last day of voluntary amnesty:

No deserters will be permitted to remain in this Sub-District. It may be well to say that the policy of pardoning deserters, has worked badly, has injured the service, and must be stopped; and that those so lost to honor as to desert, need expect to find no shelter in this Sub-District, all will be hunted down and brought to justice.

The following day, the 6th of November, the Price brothers heeded the warning and re-enlisted with the army in Collin County, Texas. Shortly afterwards, they were enrolled in the Confederate Brush Battalion in Fannin County, a unit comprised of a large number of deserters:

The Brush Battalion, of the Confederate Army was organized for frontier service November 6, 1863, with five companies. The Battalion was composed of deserters, conscripts and militia, who had taken to the brush to escape arrest by the conscript officers. They had been collected upon the promise that they would be pardoned and utilized on the frontier as a protection from Indians who were hostile.

This month Madison turns up in Shreveport, Louisiana, having earlier left Tyler. The Louisiana city is a strategic city along the Mississippi River; the Confederate government is determined to defend it from Union encroachment.

Today from Shreveport Madison writes a letter to his wife, Jane, and references having been handcuffed and probably destined for the guard house, for reasons unstated.

I this morning write you lines to inform you where I am and how I am. I am well and hardy at this time hoping these few lines will find you injoying [sic] the same blessing. Jane, I was brought here hand cuffed but the post commander has taken them off. I think that we will be taken out of the guard house in a few days. We was treated like gentlemen since we left Tyler but I can’t tell where we will go to get to McCulloch or Hubbards. I want you to have all my meat hogs killed but just a nuff [sic] to make my meat another year. Leave the best ones for another year. Keep plenty to do you and sell the balance. I will write you what to do with the money [in] the next letter. Take good care of yourself and the little babes and don’t forget to prey [sic]. Prayers is the life of the Christian. Jane, don’t be uneasy about me for I am not all the one there is in the guard house. There is a great many others in here. We are well seen about. I want you to hire you a Negro if you possibly can. I have nothing more of importance to write. Prey [sic] for me and I will for you. Direct one letter here. I your true husband until death.

Had Madison and his fellow former deserters in the Brush Battalion been handcuffed since their re-enrollment, presumably in order to prevent their running away?

Whatever happens afterwards to Madison Freedom Price is unknown, as today’s letter to his wife is his last correspondence. His family never hears from him again, forever uncertain as to his fate.