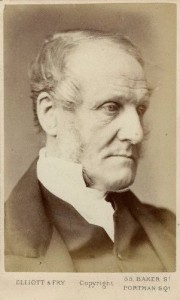 U.S. President Abraham Lincoln‘s Emancipation Proclamation has not only stirred feelings North and South, but also across the Atlantic Ocean. England, having outlawed slavery decades ago, harbors enough interest in the matter that at least one meeting is convened to discuss the proclamation, as is reported in today’s New York Times.

Next week, a few days before the meeting of Parliament, an Emancipation meeting is to be held at Exeter Hall, to give expression to English sympathy with the Proclamation. But it is remarkable that in the list of speakers there is not one great and influential name. Rev. BAPTIST NOEL, who heads the list, was formerly a Church of England clergyman, who became a Baptist, his name being a singular coincidence with his present creed. He is, undoubtedly, a man of ability, but hardly of influence beyond his sect. Mr. HUGHES, author of School Days at [???] is a clever writer, and has a certain lite[???] popularity. Mr. LUDLOW, who is, like Mr. HUGHES, a contributor to McMillan’s Magazine, is the next celebrity. He has written with some vigor in support of the National cause. There is one or two M.P.’s on the list, whose names are quite unknown to me. However, I shall attend the meeting, and give you an account of it in my next.

But the feeling of England on the Slavery question has undergone a mighty revolution. People say everywhere, “Oh, we detest Slavery, of course, but” — and there is a world of meaning in that never-failing “but.” The truth is, the English people have been committed to Abolition, but they are heartily tired of it. They paid $100,000,000 to free their slaves in the West Indies, and now consider it so much money thrown away to build up America and impoverish and cripple themselves. With Slavery they could have raised their own cotton, which they cannot do without it.

And then, jealousy and hatred of the National Government has made the English sympathize with the South; sympathy with the South makes them tolerant of Slavery. As to the Proclamation, it is generally denounced; but Englishmen with whom I converse, who are of Southern sympathies, say they are glad it was issued, because it was the last card that could be played — the last gun fired. LINCOLN, they declare, can do no more — his arming of a million of men have not been able to take Richmond, and now, if the negroes fail him, the war must end.

There have been strange illusions on both sides. The North believed the South would not fight, would be starved into submission, or, at the worst, could be conquered in “ninety days.” The South believed that Cotton was King, and that England and France must interfere to save themselves from ruin. England believed the North would be overwhelmed by a financial crisis, or civil convulsions; that drafts would be resisted, armies mutiny, or the war be ended by a counter-revolution. All have been wrong. The South will fight, and can resist for years. They are in no danger of starvation, and the results of the Proclamation are yet to be realized. The North is still abundant in resources, and can issue paper for all demands for an unlimited period. True, it is at a large discount, but this enables everybody to pay their debts. Money, such as it is, is plentiful, and business prospers. As to England and France, they are suffering, but they have borne it so far, and may go on bearing it. There is cotton enough, such as it is, for half the mills, or to supply them all at half time; but the relative prices of cotton and goods will not allow of its being worked at a profit.

The Honorable and Reverend Baptist Wriothesley Noel (1799-1873) is the brother of the earl of Gainsborough. Beginning in the 1830s a number of non-aristocrats left the Church of England and converted to the Baptist faith. When Noel, an eminent Anglican churchman and prominent writer, converted to the Baptist faith in 1849, the shocking news echoed throughout England.

Noel’s convictions of believer’s baptism, voluntary faith and church state separation led him to the Baptists, where by the end of 1849 he was pastoring a Baptist congregation. He ascended quickly among the ranks of English Baptists, becoming chairman of the Baptist Union in 1855. By the time of the American Civil War, Noel is one of the leading Baptist celebrity in all of London.

The anti-slavery meeting referenced in the New York Times story took place on January 29, with Noel as the chief speaker. During the American Civil War, the Baptist clergyman publishes broadly, offers his esteemed opinion on various matters of government and polity, and simultaneously becomes one of the leading Baptist evangelists of England. He remains a senior statesmen among English Baptists until his death in 1873.

The news correspondents’ interpretation of the current English views of slavery and the Confederacy certainly has some basis in truth, although it is of limited usefulness in understanding the complexity of English sentiment.