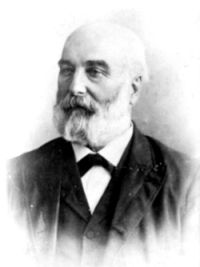 Isaac Taylor Tichenor, Baptist minister, educator and orator, is arguably the most influential Baptist minister in Alabama. Prior to the war, and following a series of other pastorates in the South, Tichenor moved to Alabama to pastor the First Baptist Church of Montgomery, already emerging as a leading congregation in the South. He also took a leading role in building up fledgling Howard College (later Samford University).

Then came the Civil War, at which time Tichenor resigned his pastorate and became a Confederate chaplain. In April 1862 he distinguished himself as a combat chaplain in the Battle of Shiloh, “not only exhorting the 17th Alabama’s soldiers to hold fast at one of the battle’s key points, but also achieving an outstanding record as sharpshooter and ‘fighting chaplain.'”

This month, Tichenor resigns his chaplain role and returns to the pulpit of the First Baptist Church of Alabama. He does not, however, abandon Confederate troops. While pastoring, he coordinates soldier relief efforts and makes preaching trips to Confederate Army camps. In the coming months, Tichenor becomes a vocal public defender of the Confederacy and African slavery. His defense of the South presages the Lost Cause myth, a post-war narrative that celebrates the old Southern “way of life” (plantation culture) and insists that states right, not slavery, was the South’s motivation for engaging the North in war.

Following the war, Tichenor becomes president of the new Agricultural and Mechanical College of Alabama (later Auburn University) and a leading proponent of higher education advancement in the South. From 1882 to 1889, Tichenor serves as corresponding secretary (president) of the Southern Baptist Convention Home Mission Board.

The entrepreneurial Tichenor thus traverses the war years in the role of prominent pastor, chaplain, missionary, educator and pro-slavery apologist, yet accomplishments his greatest achievements in a post-war South struggling to recover from the devastation of the war.