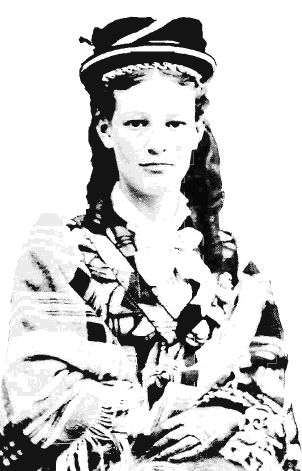 Sarah Christie Stevens, 18 years of age, is a student at Wisconsin Female College in Fox Lake. She has a drive “to do great good in the world,” and her father and soldier brothers are financing (the latter from their United States Army pay) her education in the belief that she will fulfill her wishes. Sarah, at the urging of one of her college professors, has recently joined a local Baptist church. She is also now involved in the local Soldier’s Aid Society, helping make bandages, sew clothing and bake cookies for the troops. In addition, she is active in the temperance cause.

Sarah routinely writes to her father and brothers (her mother having passed when Sarah was young), and today writes brother Sandy, telling him of her various activities of late.

Sarah’s activism continues past college, as she moves to Blue Earth County, Minnesota, marries, has children, and remains active in Baptist life and community causes through the 1880s. Among her many involvements is that of her church’s Ladies’ Mission Circle, affiliated with the (Northern Baptist) Woman’s Baptist Home Mission Society. The group meets regularly “to sew for freedmen’s schools in the South or for working girls in the cities.”

In 1890 Sarah runs for the elected office of county school superintendent in Blue Earth County, and wins the race for an office previously held by men.

While Sarah’s political career only lasts for a season, her life as a woman activist and elected official makes an imprint upon the Minnesota landscape, demonstrating that women, in addition to being wives and mothers, have a place in public life and leadership. Sarah dies in Minnesota in 1919, on the eve of the passing of the Nineteenth Amendment granting women’s suffrage.