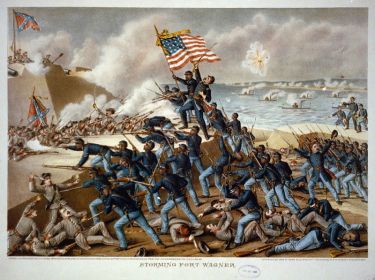 Fort Wagner stands on Morris Island, guarding the approach to Charleston. Early this morning fresh federal troops land on the island, sizing up the fort. The only approach to the beach fort is over a narrow strip of sand bordered by the Atlantic Ocean on one side and swamp marshland on the other. Prospects are grim for those soldiers who are destined to march across the beach sands. Many silently pray as they look to the fort; everyone knows the death toll will be high.

Union General Quincy Gillmore is in charge of the Union operation to seize Wagner and take Morris Island. Hoping to soften the fort and its defenders, early in the day he initiates an artillery barrage. Yet after an all day effort, the results are not encouraging: the fort shows little signs of damage, and the garrison is intact.

Late in the day comes the order to attack the fort. Col. Robert G. Shaw and his African American 54th Massachusetts Regiment is chosen to lead the way. The son of abolitionist parents and veteran of the campaigns in the Shenandoah Valley and at Antietam, Shaw commands a regiment that includes two sons of abolitionist Frederick Douglass and a grandson of author and poet Sojourner Truth. In addition, many of Shaw’s soldiers are Baptists, including regimental chaplain Rev. William Jackson.

The 54th has in recent weeks fought in a number of minor skirmishes and campaigns. Today is to be their trial by fire, a test of the will and bravery of black soldiers.

At 7:45 pm the attack begins. The 54th, followed by other Union units, marches across 1,200 yards of open ground in the face of withering fire from the Confederates holed up in Wagner. Many fall long before reaching the fort. While some men from the 54th and other units breach the fort at two points, they cannot hold their ground. Some 1,500 federal soldiers are killed or captured this day. The 272 casualties from the 54th include Col. Shaw.

Surviving the assault is William H. Carney (1840-1908), born into a slave family in Norfolk, Virginia. Having been freed from slavery at an early age, his parents — also set free — secretly provided him with an education in Virginia and then moved the family north, first to Philadelphia, then to New York City, and finally to New Bedford, Massachusetts. There the young Carney grew into manhood, working various jobs and becoming a layman in the Union Baptist Church, a congregation organized by the Rev. William Jackson, who would later be Carney’s chaplain in the 54th Regiment.

On the eve of the war Carney considered a career in the ministry, but the war changed his plans. Carney felt he needed to serve God by fighting for the freedom of his enslaved black brothers. This was his new calling. On March 4, 1863, Carney and forty other New Bedford blacks enrolled in Company C of the Massachusetts 54th Regiment, America’s first African American regiment.

Now, In the heat of today’s assault on Fort Wagner, a wounded Carney notices that the flag bearer has been shot down nearby. Painfully but deliberately, Carney retrieves the flag and continues charging toward the fort. Confederate defenders focus their fire on the colors, and Carney is shot several more times. Yet he manages to crawl to the walls of Fort Wagner, flag still in hand. Nearly dead from blood loss, Carney is rescued by his fellow soldiers. Clutching the colors as he is carried behind Union lines, he declares triumphantly, “The Old Flag never touched the ground!”

For his bravery, a yet-living Sergeant Carney on May 23, 1900 becomes the first African American soldier to receive the Medal of Honor. His medal citation reads:

When the color sergeant was shot down, this soldier grasped the flag, led the way to the parapet, and planted the colors thereon. When the troops fell back, he brought off the flag, under a fierce fire in which he was twice severely wounded.

Despite the bravery of the 54th Regiment, the Union does not take Fort Wagner this day. Confederates emerge victorious, with only 222 rebel soldiers killed or captured. The die, however, has been cast. Fort Wagner will fall to Union forces in time. And Shaw, Carney, chaplain Jackson and the entire 54th are remembered as one of the bravest regiments serving in the Civil War, their heroic assault on Fort Wagner inspiring U.S. President Abraham Lincoln and Union officers to rapidly expand the recruitment of black soldiers.

By the end of the war, the 54th’s legacy is sealed, as black Union soldiers prove instrumental to defeating the Confederacy and ending slavery in America, fulfilling Carney’s calling — and that of many other black Baptist soldiers — of extending freedom to all blacks.

Many years later, the heroics of the 54th are remembered, with some Hollywood liberties, in the popular 1989 movie Glory.