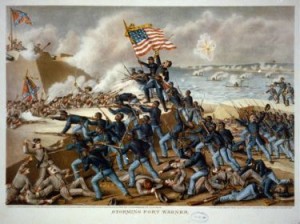 The 54th Massachusetts Infantry Regiment, fighting heroically less than two weeks ago during the failed assault on Fort Wagner near Charleston, demonstrated the will and determination of African soldiers to engage Confederate forces despite the threat of execution if captured by the rebels. Many, perhaps most, of the soldiers of the 54th were or are Baptists (during the Battle of Fort Wagner many were killed in action, and many others were taken prisoner by the Confederates and executed).

Today a mother of one of the surviving soldiers writes U.S. President Abraham Lincoln, praising the president for the Emancipation Proclamation and pleading for equal treatment of black soldiers who are taken captive.

Excellent Sir My good friend says I must write to you and she will send it My son went in the 54th regiment. I am a colored woman and my son was strong and able as any to fight for his country and the colored people have as much to fight for as any. My father was a Slave and escaped from Louisiana before I was born morn forty years agone I have but poor edication but I never went to schol, but I know just as well as any what is right between man and man. Now I know it is right that a colored man should go and fight for his country, and so ought to a white man. I know that a colored man ought to run no greater risques than a white, his pay is no greater his obligation to fight is the same. So why should not our enemies be compelled to treat him the same, Made to do it.

My son fought at Fort Wagoner but thank God he was not taken prisoner, as many were I thought of this thing before I let my boy go but then they said Mr. Lincoln will never let them sell our colored soldiers for slaves, if they do he will get them back quck he will rettallyate and stop it. Now Mr Lincoln dont you think you oght to stop this thing and make them do the same by the colored men they have lived in idleness all their lives on stolen labor and made savages of the colored people, but they now are so furious because they are proving themselves to be men, such as have come away and got some edication. It must not be so. You must put the rebels to work in State prisons to making shoes and things, if they sell our colored soldiers, till they let them all go. And give their wounded the same treatment. it would seem cruel, but their no other way, and a just man must do hard things sometimes, that show him to be a great man. They tell me some do you will take back the Proclamation, don’t do it. When you are dead and in Heaven, in a thousand years that action of yours will make the Angels sing your praises I know it. Ought one man to own another, law for or no, who made the law, surely the poor slave did not. so it is wicked and a horrible Outrage, there is no sense in it, because a man has lived by robbing all his life and his father before him, should he complain because the stolen things found on him are taken. Robbing the colored people of their labor is but a small part of the robbery their souls are almost taken, they are made bruits of often. You know all about this

Will you see that the colored men fighting now, are fairly treated. You ought to do this, and do it at once, Not let the thing run along meet it quickly and manfully, and stop this, mean cowardly cruelty. We poor oppressed ones, appeal to you, and as fair play. Yours for Christs sake

Meanwhile, in the land where Africans are yet enslaved, an article in the South Carolina Confederate Baptist newspaper this month praises women for harvesting the grain crop in the absence of their husbands and sons.

In many districts in our State we have seen with grateful admiration the waving fields of wheat enlivened by the labors of the mothers, wives, sisters, and daughters of our brave soldiers. The hand of woman has aided largely with the blessing of the God of harvest in preparing and getting in the great grain crop to which we have been looking with anxious expectations. The labor of cradling (or cutting the wheat) is done in some sections by the few males at home, by the servants and the invalid soldiers on furlough, but the binding and stacking has been done in great part, and from necessity, by the brave and faithful women, who are worthy to be sisters to the soldiers of our Army.