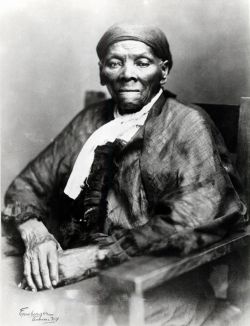 Today newly-freed former slaves gather in the Baptist Church of Beaufort, South Carolina, a coastal town under Union control and a base of operations for the housing, training and education of freedpersons, many of whom are now serving in the United States military.

The story of the gathering of these freepersons in the Baptist Church of Beaufort involves Harriet Tubman, now-famous former slave who has devoted her life to freeing other enslaved persons. Under the cover of darkness about 3 a.m. on June 1, two Union ships, dispatched from Beaufort, land a detachment of soldiers at the mouth of the Combahee River. Meanwhile, other ships and soldiers deploy in the vicinity in a collective mission to raid upriver Southern plantations and free enslaved persons. Confederate forces are thin in the area, and flee after putting up minimal resistance. Slaves in the fields, initially uncertain as to the clamor, soon realize what is happening and flee toward the Union ships.

The raids are based on intelligence earlier supplied by Harriet Tubman. She is present with Union forces during the raid, and latter recalls the scene of slaves running toward freedom:

“I nebber see such a sight. We laughed, an’ laughed, an’ laughed. Here you’d see a woman wid a pail on her head, rice a smokin’ in it jus’ as she’d taken it from de fire, young one hangin’ on behind, one han’ roun’ her forehead to hold on, t’other han’ diggin’ into de rice-pot, eatin’ wid all its might; hold of her dress two or three more; down her back a bag wid a pig in it. One woman brought two pigs, a white one an’ a black one; we took ‘em all on board; named de white pig Beauregard, and de black pig Jeff Davis. Sometimes de women would come wid twins hangin’ roun’ der necks; ‘pears like I nebber see so many twins in my life; bags on der shoulders, baskets on der heads, and young ones taggin’ behin’, all loaded; pigs squealin’, chickens screamin’, young ones squallin’.”

The 750 slaves thus freed are transported to Beaufort, where their new life of freedom begins at the Baptist Church, a congregation formerly controlled by white slaveholders but whose facilities are now utilized by thousands of freedpersons whose worship of God is now autonomous. Soon they will be moved to a resettlement camp on nearby St. Helena Island, where thousands more black Baptists live and worship in freedom.