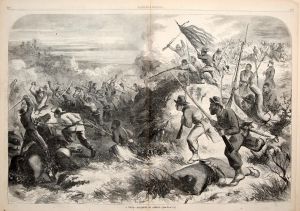 Today Joseph Andrew Jackson Lightburn, a Baptist minister and boyhood friend of Confederate Gen. Thomas “Stonewall” Jackson, is appointed a brigadier general and ordered to report to the Army of Tennessee. He serves admirably throughout the war, afterwards retiring to spend the rest of his life serving as a minister, including at the Broad Run Baptist Church in West Virginia. He dies at Broad Run in 1901, and is buried there in the churchyard.

Meanwhile, today’s edition of Harper’s Weekly features a piece on “Negroes as Soldiers” stationed in Union-controlled South Carolina, of the ranks of whom many are Baptists.

The drill masters in the Department of the South report that the negroes in the South Carolina regiments evince great aptitude at learning the manual of arms. They are more docile than white recruits, and when once they have mastered a movement they retain the knowledge perfectly. Similar testimony is borne by officers in the West. One of them predicts that with proper drill and training the negroes will be the steadiest rank and file in the world.

The magazine also reprints a recent piece from the New York Times about the effectiveness of black soldiers of the First Kansas Colored Volunteers in combat.

The detachment under Gardner was attacked by the foe, who swept down like a whirlwind upon it. One volley was fired in concert, which emptied several saddles, and then this devoted body was separated by the force of that sweeping charge. The fight thus became a hand to hand encounter of one man to six. The rebels were mostly armed with shot-guns, revolvers, and sabres, our men with the Austrian rifle and sabre-bayonet. The latter is a fearful weapon, and did terrible execution in the hands of the muscular blacks. Six-Killer, the leader of the Cherokee negroes, fell with six wounds after shooting two men, bayoneting a third, and laying a fourth hors du combat with the butt of his gun. Another one, badly wounded, Sergeant Ed. Lowrey, was attacked by three men; he had discharged his rifle, and had no time to load again, when they fell upon him with revolver and sabre. He was then badly hurt with a shot-gun wound. One man demanded his surrender, to which the reply was a stunning blow from the butt of the rifle, knocking him off his horse. The negro, when approached, had his sabre-bayonet in hand, about to fix it on his gun. The prostrate man got a crashing blow from it on the skull as he fell, and then, as the other charged, the bayonet was used with effect on the nearest horse, and the butt of the gun on the next man.

Captain Crew, retaining his position at the head of the few men who keep together, retreated with his face to the enemy, firing his revolver as he did so. He fell with a terrible wound in the groin, but again rose and retreated. Surrounded by half a dozen of the foe, he was ordered to surrender. “Never!” he shouted, at the same time calling to the half dozen negroes around him to die rather than give up. He then fell dead with a bullet in his heart. His body was instantly rifled of revolver and watch, though his purse was not found. Five minutes afterward the rebel who took the watch was killed by one of the negroes, who again took the watch from him and brought it into camp.

So ended the battle of Island Mounds, which, though commenced through the rash and impetuous daring of the officers, yet, under most unfavorable circumstances, resulted in a complete victory to the negro regiment.

What I narrate I saw myself, and having witnessed several engagements since this rebellion commenced, I know what fighting amounts to. H.