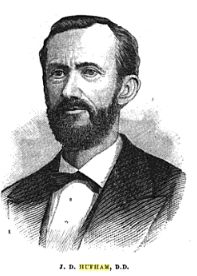 Southern Baptist minister J. D. Hufham, editor of the Biblical Recorder of North Carolina, addresses his view of the current situation in the Confederacy as winter turns into spring and the second anniversary of the war nears.

Winter is gone, and Spring is here. We feel it in the atmosphere and see it in the changing appearance of the forest and the field. But its return brings with it, little of the buoyancy of thought and feeling with which its advent is usually hailed. The condition of the country and the prospects opening before us swallow up all other considerations. The war, with its miseries and anxieties, presses upon every community, every household, and every individual in the Confederacy; and the question is asked again and again, “When will it end?” The people of the South did not desire the war, and accepted it as the only escape from disgrace and enslavement; and from its commencement they have been ready to lay aside their weapons and have peace on any terms not incompatible with their honor and dignity as a people. Peace on these conditions, they now desire and pray for, above all things. The mothers, and wives, and sisters, throughout the land, count the days passing slowly and wearily away, and long for the time when their loved ones are to return; the soldiers, in the camp and the hospital, with sad, sweet memories of home and of brighter, happier days clinging to them wherever they go, look forward with eager anticipation to the period when, toil, privation and danger, all forgotten, they shall return to the pursuits and enjoyments which they left behind, at their country’s call; the refugee, driven forth to find an asylum among strangers; those who are exposed to insult and outrage within the enemy’s lines; the prisoner pining in captivity; the poor on whom the burdens of war press heavily;–all classes and conditions would hail an honorable peace as the greatest of blessings.

When are we to have it? Not soon, if we are to judge from the signs of the times. The hopes founded on the indications of a revolution in public sentiment in the United States, have been swept away by the developments of the last few weeks. Evidently, another fearful and bloody campaign is before us, and we should prepare ourselves for it. It is clear that the authorities in Washington will not relax their efforts to conquer or destroy us until they are compelled to do so. As long as they can command the men and the money, the war will go on; and the Federal congress, at its last session, voted them an ample supply of both. Mr. Lincoln has been invested with the powers of an autocrat. He is authorized to call out the whole fighting population of the North; to arrest and imprison whomsoever he pleases, without question or restraint; and a supply of money has been given to him, amply sufficient to carry on the war, at least another year. This action of the abolition Congress, so far from increasing the discontent at the North, seems to meet with favor. Even many of the Democratic leaders, under this new legislation, are willing to try the struggle ninety days or six months longer.

Such then is the prospect which opens before us for the Spring and Summer. It is startling enough. Our enemy, with his ranks, which have been thined by disease, desertion and death, again filled up with fresh recruits, will renew the attack at all points, and the bloody drama of 1862, with its horrors and anxieties, and,–let us hope,–with its brilliant triumphs of Southern arms will be [?] enacted.

Of course, “the people of the South” referenced by Hufham who “did not desire the war” does not include African slaves, who even know, grateful for the war over slavery, are escaping by the thousands to freedom behind United States army lines. The preservation of “honor and dignity” demanded by whites in order to secure a peace pact is a reference to maintaining freedom and liberty for whites only, which is, of course, unacceptable to the United States.

Yet while myopic in assessing his nation’s demeanor, Hufham accurately portrays the internal struggles and strengths of the United States. While public sentiment regarding the war is yet mixed, the determination of Northern politicians remains for now and the reservoir of manpower is far superior to that of the South. Aware that politicians and public alike are demanding progress against the Confederacy, President Lincoln seeks a great and decisive battlefield victory, thus far so elusive, to solidify support for the war against the rebellious states clinging to their holy cause of African slavery.