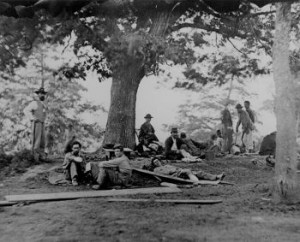 Wounded soldiers being tended, from the Battle of Chancellorsville.

North Carolina Baptist Biblical Recorder editor J. D. Hufham offers his current, and rather sober, assessment of the war effort as news of Confederate victory in the Battle of Chancellorsville filters southward.

The next few weeks or months will be productive of results of vast moment to the people of this nation. The enemy seem to have abandoned the plan of an inactive summer campaign with the hope of starving us out, and are gathering their forces for a general and simultaneous movement. From all quarters the indications are that many bloody battles will be fought. On them will depend, to a great extent, the fate of our people and government.

The enemy’s cavalry have advanced far down into Mississippi, their forces are drawing nearer to Vicksburg, while a formidable fleet of gun boats, in full possession of the river between that place and Port Hudson, are destroying our defences along the banks, and Banks and his forces below are ready to cooperate with those above. In middle Tennessee, Rosecranz with an army of seventy five thousand men confronts Bragg and Johnston, while Burnside with thirty thousand men threatens the Eastern part of the State by way of Cumberland Gap. Their gunboats swarm on the Tennessee river, and from Decatur, they menace our rear. All things in the west indicate speedy and bloody collisions between the opposing forces.

But all eyes are now turned with intense interest to Virginia where so many bloody dramas have been enacted. It is known that Hooker has called his troops from their protracted inactivity and led them into the field. Crossing the Rappahannock and the Rapidan, he has attempted to flank our lines at Fredericksburg and thus carry out the programme in which his predecessors in office have made such signal failures. True the telegraphs brings us intelligence that he has been defeated and driven back in a preliminary engagement, but we still look with eager anxiety for further news.

We believe that we shall pass safely through this season of trial, as we have done through so many others. With the blessing of God on our brave men and skillful Generals we believe that the enemy will be beaten in every encounter. Let us all hope for this, and continue to pray that it may be so. On the other hand let us be prepared for reverses if they should come.