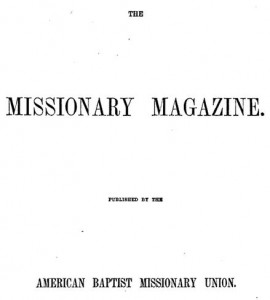 Northern Baptists, while devoted to ending African slavery in the United States, maintain a vibrant foreign missionary force throughout the war years. That they are able to continue robust work in foreign nations is a testimony to the strength of their missions programs. This is not to say, however, that all goes well for Northern Baptists in foreign lands.

One particular problem is the Toungoo Mission (Burma) of the (Northern) American Baptist Missionary Union. There the so-called “God-language controversy” has reached a critical enough mass to make the pages of today’s New York Times. The newspaper explains the controversy in this manner:

The Baptist press at the North are discussing with much warmth the novel views of Mrs. Mason, the Baptist missionary in Burmah, the wife of Dr. Mason, the linguist and translator. This lady professes to have discovered what she calls a “God-language.” This she discerns not only in works of nature but in works of man as well, such as carpels and fingered cloths. Mrs. Mason thus recites her discovery:

Last September I was in Philadelphia, U. S. A. It was midnight, and I eat alone in an upper chamber. Something seemed to speak; there was no voice, but it came like a flash: “Look down upon the floor.” I looked, and there was the fourth chapter of Revelation as plain as flight woven in the carpet at my feet. It was an English or Dutch ingrain carpet, of a rich design, and that design and the colors all spoke out this chapter. I was so much overpowered by it I called up my son to see it, and neither of us dared afterwards to step on the carpet. I began to look into letters, studying the origin of forms. The result has been this: 1st, I am convinced that the alphabet was known to Adam and Eve, and that the alphabet is stereotyped in the heavens, and from this all nations have learned to count and to reckon time. It proves, 2d that the solar system is our own Bible, and represents God and the history of man’s redemption. It proves that God took upon himself the form of a world, and covered it with sacred letters, making every rock, mountain, and river, and country, a word or chapter.–Then the world was made of book, lighted up with trees, flowers, grass, birds, fishes, and animals, which were created expressly for letters to this world-Bible. Consequently Adam gave names to all expressing or expressive of the word. Did you ever notice how like the first six verses of Geneis and the first six verses of John were? One telling us of the natural, the world, the other of the spiritual, the Word? World is certainly Word with a light on it. God has in infinite mercy given us the key to this great book, and to my inexpressible surprise and joy, I read this same all over the Karen dresses. Their dresses or sacks are the true New Testament of our Brole. I have always told them that a deliverer would come, and they would yet have a Cansan.”

Some decades will pass before the birth of the Pentecostal movement accompanied by speaking in unknown tongues. The present concept of a universal, God-created alphabet that is written in nature, exhibited in the hand-made clothes of humans, and even evidenced in the temple idols of the Karen people has divided the converts in the Toungoo Mission. Some have become followers of the Masons, while others insist upon adhering to the scriptures and to Baptist principles. The controversy and resulting division is such that it is damaging the American mission board at large.

The problem, however, is far from being resolved, and remains a bone of contention in Northern Baptist life for the remainder of the Civil War years. Following repeated attempts to force the Masons to recant their beliefs, the mission agency dismisses the couple in July 1864. An investigative report of the controversy published in the January 1865 edition of Baptist Missionary Magazine prints extensive correspondence related to the matter and calls the doctrines of the God Language “wild” and “erroneous,” with the results being “evil.”

Northern Baptists thus wash their hands of the Masons’ God Language and try to salvage the Toungoo mission as best as they can.