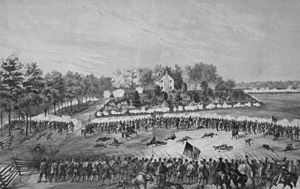 The key city of Jackson, Mississippi, having been occupied by Union troops for two days, is by now mostly destroyed as Grant’s army moves out of the city this day.

A news correspondent reports of the destruction from the scene, following the occupation. At least one Baptist building now stands in ruins.

In order to ascertain the amount of damage done by the Yankees during their forty-eight hours occupation of the city of Jackson, we went over and took a careful survey of the place yesterday morning, and give below the result of our observations.  We could not get a complete list of the property burned and otherwise destroyed owing to great confusion in the city.  The following buildings were burned:

Green’s Cotton Factory, together with all the machinery, 300 bales of cotton, and all the buildings connected with the factory, Phillips’ factory, and all the small buildings connected therewith, J. A. Stevens’ foundry, Bailey’s cotton shed, containing a large quantity of tar, lime, cement, &c., Catholic Church and parsonage, Mrs. Bakewell’s house, and contents; Confederate House, together with furniture &c., Railroad depot, and all the buildings immediately west and south of the same; State penitentiary, with all the machinery; flouring mill, near Phillips’ factory, all the houses on State street, from  Shaw’s store to Graves’ corner, including Green’s Banking House; Ambrozier’s grocery, Allen & Legon’s store, and Grave’s large brick building, with a number of small intervening houses; all the houses on the south side of Pearl street from State street to the Mississippi Baptist office, including the Confederate Quartermaster’s office; a number of sheds or were houses, near the old old depot of the Southern Railroad, containing an immense quantity of cotton, sugar, molasses, &c., and a number of old cars, belonging to both railroads, all the houses in front of the City Hall, and Market house, except Mrs. Sanders’ boarding house and one or two small shops, Lemley’s hat factory, Robinson’s warehouse, General Freeman’s dwelling house, all the buildings belonging to the fair grounds, rope factory and salt petre works; the railroad and city bridges across Pearl river, and all the bridges and trestle work on the Southern  Railroad for several miles; all shops where government work was being carried on.  All the stores in the city were pillaged, their contents either carried off or thrown into the street and burned.  The Mississippian office was broken open, the type thrown in the street and the presses and furniture broken up.  The Post Office was rifles of its contents.  The Governor’s mansion was broken open and pianos and furniture destroyed.

The Episcopal church was entered and the whole interior effaced.  Nearly all the private residences were entered and trunks broken open, fine dresses torn to pieces, and all jewelry, silver ware and provisions taken.  Dr. Knapp’s office was broken open, his dental instruments carried off and his furniture destroyed.  Capt. L. Jullian’s book store and bindery was destroyed.  J. W. Gray & Co’s drug store was partially destroyed.  Jo. Morgridge was an extensive sufferer by the depredations of the vandals.

E. Vorden’s loss in sugar, molasses, &c., is estimated at $200,000.  D. W. Busick lost heavily in his tobacco commission store.  Allen & Ligon lost all their books, paper, money and merchandize.  Dr. S. C. Farrar lost his horses and mules.  J. M. Rawlins lost his carriage and carriage horses.  Almost every horse, mule, cow, and hog in the city was taken.  Watches and breastpins were forcibly taken from gentlemen on the street.  Negroes, from 300 to 500 were taken from the city and adjacent country, and as an inducement for them to go they were promised commissions in the Yankee army, and about 100 of them were armed before they left the city.

Intelligent gentlemen estimate the total loss of property in the city at five millions of dollars.

Today, twenty miles east of Vicksburg, Union forces again engage and defeat a Confederate force, this time in the Battle of Champion Hill. Vicksburg is more vulnerable than ever.