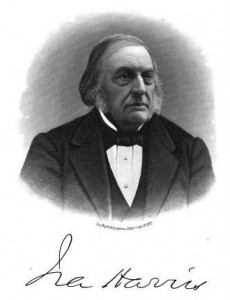 Afterwards, Sen. Harris delivers the opening presidential address, voicing a robust defense of freedom for all and praising the United States’ efforts to suppress the Southern rebellion and eradicate African slavery.

….This body, during the forty-nine years of its existence, has never assembled under circumstances more profoundly interesting than those which now surround us. God has given us prosperity beyond any other people. We have suddenly grown to be great. But now a dark, dense cloud overhangs us. Our nation is convulsed with a civil war—a war which for magnitude and the desperateness with which it is waged, has no parallel in the history of civil strife. It is a war, too, freighted with results for good or evil beyond the power of man to estimate or conceive. Yet, terrible as it is, I can but regard it as Heaven’s merciful visitation for the discipline of a nation it designs, not to destroy, but to preserve and bless.
Certain I am that the hand of God is in this struggle. His people should not be slow to recognize it. I rejoice that my own brethren have not thought it necessary, in their great convocations, to smother their patriotism. The action of this body at its last annual meeting in reference to the stupendous crisis through which our nation is passing, gave me the most profound satisfaction. The sentiments then adopted, admirable for the nerve and vigor with which they were expressed, were dictated by the most elevated patriotism. How true it is, as was then asserted, that the progress of civilization, of freedom, of Christianity throughout the world, are all involved in the present war.
Our fathers, when they gave us our present form of government, left in it what they had found, a most mischievous and demoralizing element. They not only left it, but they protected it with constitutional guaranties. Slavery, in its very nature opposed to freedom, always greedy of power and impatient of restraint, not content with the protection thrown around it by the Constitution, demanded the right of unlimited expansion. It claimed to be recognized among the foundation principles of the government.
Because these claims were resisted, it rebelled. It commenced its encroachments in our religious associations. This venerable body was rent in twain by its imperious exactions. At length, having deliberately prepared itself for the fearful issue, it has attempted the disruption of the government itself.
So long as it kept itself within the limits contemplated by the framers of the Constitution, so long it was entitled to protection. The national government had no right to interfere with it. But now, by its own act this impediment has been removed. Slavery has rebelled. It has committed treason, the great crime of crimes, the “unpardonable sin.” It has become an outlaw, and, like other felons, it must be fettered and bound. As a political power it must be annihilated, and forever. There is now no alternative. There can be no more negotiation, no more diplomacy, no more compromise, no more peace conventions, no more delusive expedients. Each party has inscribed its principles upon its banner, and the bloody contest must go on until the slave power is subdued or our country is overthrown.
At such a time and in such a crisis there can be no neutrality. He that is not for his country is against it. And it becomes every patriot, and most of all every Christian patriot, to bring home to himself more closely his obligations to his country, that the spirit of the nation may be quickened, that its self-devotion may be strengthened, and its energies more thoroughly aroused.
Notwithstanding the intensity of the conflict, and the forebodings of fearful hearts, I have never doubted as to the issue. My confidence is still unshaken. God has great purposes yet to accomplish through the instrumentality of this nation, and He will not be disappointed. Our country, emerging from the cloud which now envelops it, into a clearer sky, purified and more firmly united and compacted together by the fearful ordeal through which it has passed, will rise to a higher, nobler career among the nations of the earth, and under a Heavenly guidance move on to the accomplishment of its holy destiny.
Perhaps I ought to apologize for having said as much as I have here at the very threshold of our proceedings. I can only say I have spoken out of the abundance of the heart. I am sure there is not one who hears me who does not respond to the sentiments I have uttered. If any shall think their utterance here ill-timed and out of place, I can only cast myself upon their patriotic indulgence.
Though not familiar with the details of the operations of the Union for the past year, I think I know enough of them to be able to assure you that when the reports shall come to be presented, there will be found in them abundant cause for gratitude and congratulation.

Hoping and trusting that a spirit of harmony and Christian affection and sympathy may characterize all our deliberations, let us all labor and pray that this venerable Union, so dear to us all, may still go on with increased vigor and success in its great and heavenly work of evangelizing the world.

Christian patriotism and nationalism resounds in Harris’ speech. The United States, founded on freedom, is the vessel of God and the hope of civilization worldwide. The U.S. Constitution left the task of freedom unfinished; only by eradicating slavery will the constitutional ideal of freedom, an ideal inherent within Christianity itself, finally be realized.