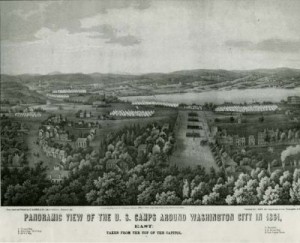 This year, in the wake of the Emancipation Proclamation, the founding of African Baptist churches proliferates. Unfortunately, the details of the formation of many of these congregations are nebulous.

According to one early source, the Fourth Baptist Church, African (later Metropolitan Baptist Church) is formed this month in the District of Columbia “by a few holding letters from the Nineteenth Street Baptist Church during the pastorate of Duke W. Anderson, and by a few members from other churches. Henry Bailey was the first pastor.” Initially, the fledgling congregation meets in an abandoned barracks. Possibly, the founding of the congregation does not become official until 1864, as later historical accounts refer to the latter year.

Rev. Bailey has been ministering to some 4000 freed slaves housed in the Shaw barracks, otherwise known as “Hell’s Bottom,” during the past year. During Bailey’s six-plus years as pastor of the church, the congregation becomes known as “heaven-bound in Hell’s Bottom” and builds their first sanctuary.