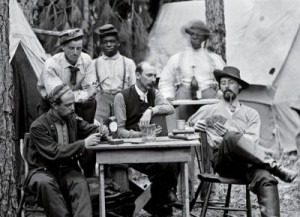 The sins of Confederate soldiers are an oft-discussed topic in the North Carolina Baptist Biblical Recorder, contrasted alongside a growing body of eyewitness accounts of revivals in the camps. Today’s edition of the newspaper offers two articles about army camp life. The first is an account of an encounter between an anonymous chaplain and card-playing soldiers:

As I approached a tent when some soldiers were playing cards, I asked if I might take a hand with them. They, looking rather confused, replied in the affirmative. I threw the tract, “Swearing.” They all stopped, looked at the tract, and they looked at each other with no little surprise.–“Your cards and mine do not seem to play together,” said I. “Ours are real cards,” said one. “And mine are all trumps,” said I. Then I threw “Belshazzar and his End,” “The Prodigal Son,” and “Sufferings of the Lost,” on the table. Each of the four soldiers took one and putting up the cards commenced reading. I then left, thanking them as I did so, that they had allowed me to play “High, Jack, Game” for them, and “Low” for the cards.

The second offers even more positive eyewitness news from the Confederate camps:

The Chaplain of the 61st N. C. Regiment writes, “We have but little profanity and that is saying a great deal for a regiment now. There is a good state of feeling on the subject of religion. Prayer meetings at night are well attended. I have never been so pleasantly situated.”

The Chaplain of the 1st Regiment, stationed on the Rappahannock, writes, “Our revival is still increasing in power and interest. We have 20 to 30 converts. The anxious list is growing. I preach every night when the weather will admit.”

A brother informs us that he was with one company in the 29th regiment, about a year and heard only two oaths. He also informs us that there is a lively religious interest in the regiment at this time.

To readers fall the task of discerning whether news from the army camp is mostly bad or mostly good.