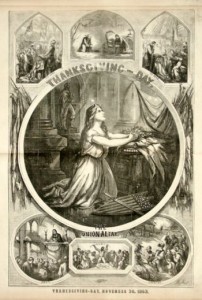 Until the present, Thanksgiving observances have been state-specific affairs largely confined to the New England region and, to a lesser extent, the North at large. There has been no consistency in terms of the timing of the observances, with many prior observances occurring early in a given year.

Since 1846, however, American writer and editor Sarah Josepha Hale (author of “Mary Had a Little Lamb”) has been petitioning U.S. presidents to set aside an annual national day of Thanksgiving. Whereas prior presidents never responded to Hale’s plea, Lincoln took the author’s request to heart.

Today, by order of U.S. President Abraham Lincoln as stated on October 3, 1863, a national day of observance of Thanksgiving takes place. It is declared to be the first of annual celebrations in the United States on the last Thursday of each November.

For this first formal, national observance there is much for which to be thankful. The war effort is going well for the Union and hope is mounting that the rebellious South will soon be subdued and the great conflict brought to an end. The latest great victory is the Chattanooga Campaign in which Union General Ulysses S. Grant‘s Army of the Tennessee has routed the Confederate Army of the Tennessee over the past three days. This very day, Confederate forces are beating a hasty retreat further southward into Georgia.

A number of Northern Baptist churches observe the occasion. I. S. Kalloch, pastor of Laight-Street Baptist Church of New York City, preaches a special sermon on this Thanksgiving day, of which, in the following excerpt, he voices thanks mingled with sadness over the sacrifices of lives lost that are turning the tide of war into a victory that will echo throughout the world.

Thanksgiving is a duty. Under all circumstances and in all things we are to give thanks. It is never so bad with us as it might be. It is never so bad as it would be if we had our deserts. Even in time of war, there is much to be thankful for. War, even civil war, is not the worst thing. Degradation, stupidity, the insensibility that can neither feel nor resent an injury, is as much worse than war, as war is worse than holy peace. As death is preferable to life purchased at the price of honor, so is war, in its bloodiest strides and ghastliest calamities, infinitely preferable to national peace purchased at the price of national degradation. There never would have been any war if every tyranny could have had its way. But what kind of a peace would it have been? True, war is an unutterable calamity. Even in this glad day of thankgiving, while the glad news of victory cheers every heart and nerves every arm, there are bleeding bosoms, and fast-falling tears, and desolated homes, and a far-running chill of orphanage, and widowhood, and death. Brave-hearted bleed that we may rejoice; gallant heroes fall that our liberties may stand.

“We mourn for these the early dead,

Who sleep in glory’s crimson grave,

Still may their names a watchword be

To the sad land they died to save.”

May their memories incite us to a worthy completion of what they have so worthily begun. In order to this we need: 1. A just conception of the nature and magnitude of the contest. It has an important bearing upon Slavery, and its end will be the end of Slavery. But that is not all. It affects not only black men, but white men; not only America, but the world. Slavery is rather the pretext than the cause of the rebellion. It is the culmination of the old feud between the Roundhead and the cavalier, between the democratic and the aristocratic classes, between civilization and barbarism. The blow which ends this mad rebellion will be heard in the shout of the struggling patriot, and the sundering of the bondman’s fetters, every where! Our soldiers, then, are called to the simple and sanctified defence of their country. It is no war of personal ambition or of territorial aggrandizement that calls them to the field. In a larger view, they fight in defence of the moral constitution of human nature; in defence of truth, and order, and liberty throughout the world. 2. We need confidence in our rulers. They are only men. Some of them may be weak men. Some of them may be bad men. But they are at the head. Their interest is more personal, direct, palpable than ours. No man can have as many motives as ABRAHAM LINCOLN to desire immediate success. Let us watch them closely, but trust them wisely. Let us not be for the Government and against the Administration, or what amounts to about the same thing, for the war, but against all the means of its successful prosecution!