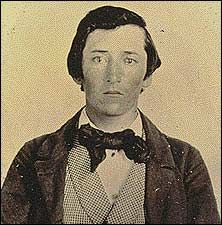 Ohio native, outlaw and Confederate raider William Quantrill is on the run with about 300 men. On August 21, Quantrill and some 450 men had attacked Lawrence, Kansas and murdered 183 men and boys. Lawrence was the home of U.S. Senator James H. Lane, a leading voice in keeping slavery out of Kansas. Lane had been a primary target of the Confederate guerrillas, but had managed to escape during the raid.

In retaliation, Union forces in Kansas beefed up their presence and in the weeks following Quantrill’s raid forced Confederate sympathizers out of four counties on the Missouri border, looting their belongings and burning their homes. The federals also set out to kill or apprehend Quantrill.

Meanwhile, Quantrill’s raiders are moving southward. Along the way they continue ambushing Union forces. In recent weeks, federal losses to Quantrill have grown. Union attempts to capture Quantrill and his men have thus far been unproductive, other than forcing the raiders ever further to the south.

Fighting with Quantrill are brothers Nathan, John, Hiram and Gabriel George, Kansans whose house has been burned numerous times in the ongoing warfare between the two sides. The George clan are friends with William Quantrill, who during his earlier movements had camped several times on the George’s 900 acre farm.

The entire family of Georges are members of Oak Grove Baptist Church, a church that Quantrill has visited on more than one occasion. One George brother later recalls that “He [Quantrill] was an admirer of many of the beautiful girls in that vicinity. To one of these girls he gave the first photograph he ever had made of himself.”

Today the four George brothers fight alongside their friend Quantrill in the Battle of Baxter Springs, an engagement that takes place in the larger vicinity of Fort Blair. Most of the action unfolds on the Kansas prairie, where Guantrill’s raiders catch a small Union detachment by surprise and kill most of the federal troops, the death count totaling some 80 of the 100 Union soldiers. Survivors take shelter in another nearby bulwark, Fort Baxter.

The commanding officer, Major General James G. Blunt, commander of the Army of the Frontier, survives and  vows to retaliate. Writing from Fort Baxter, he declares:

I am now waiting the arrival of troops from Fort Scott. If I get them, which is doubtful, as the Fourteenth is not armed, I will follow the hounds through the entire Southern Confederacy, as long as there is a prospect of overtaking them.

Following today’s successful ambush, Quantrill, the George brothers and their fellow Confederate guerrillas continue journeying southward, knowing that they are wanted men. In the coming months they are forced to retreat to Texas, where some disband and enlist in the Confederate army, while others break up into smaller raiding parties and continue their guerrilla activity. Quantrill is eventually killed during a raid in Kentucky in 1865.

In the months following the ambush, the four George brothers split up and enlist in the Confederate army, fighting for the remainder of the war. All survive the great conflict, with John Hicks being the last to die in 1926.

Shortly after the ambush Union General Blunt is temporarily removed from command and then later restored. Surviving the war, he practices medicine and law before dying in 1881 in an asylum, due to “softening of the brain.”