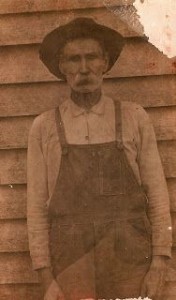 In one of the most ardent Confederate states, there is a pocket of white resistance that grows stronger as the war progresses. Now, as anti-Confederacy sentiment across the South is gradually rising due to hard economic conditions, home front deprivation, resentment of Confederate heavy-handedness, and the length of the conflict, more and more male residents of Winston County in north Alabama join the Union Army, primarily in the federal 1st Alabama Cavalry Regiment.

Winston County is rugged hill country, not home to many slave owners. The county’s representative at that the Alabama Secession Convention of January 1861 had voted against secession, and after the war began the county tried to stay neutral, the Union-sympathizing residents hoping they would be left alone. Such was not to be the case, however. The Confederate Conscription Act of 1862 led many men to leave their homes and hide out in the nearby woods and canyons. Many joined the Union Army. In June 1863 a Confederate Army raid in the area sought to capture deserters and draft-dodgers, further angering many remaining residents.

Thus far in the war years, there have been a number of localized conflicts between Union and Confederate sympathizers, a pattern that continues throughout the war.

Today, Charles Alexander Taylor becomes the latest Winston County resident to join the 1st Alabama. He serves in the regiment with his brother, Andrew Jackson Taylor. The family–including the brother’s father–has been vocally supportive of the United States since the beginning of the war.

Two months hence, Taylor, during a recruiting trip in Mississippi on Christmas day, is shot by rebel bushwhackers. His horse bolts, throwing an injured Taylor to the ground. For many days, the Union soldier hides in the woods to keep from being shot by rebels, eventually finding his way back to his unit. But his injury does not heal, and Taylor is discharged from the army on May 1, 1864.

Following the war, Winston County becomes a local stronghold for the Republican Party.

For his part, Taylor, married to wife Louisa Jane, becomes a Baptist minister, active in the Clear Creek Baptist Association. At a time when white Baptists of the South deeply resent the intrusion of Northern Baptists into affairs of Baptist life in the Deep South, Taylor, despite having fought for the Union, finds acceptance among Baptists of Alabama. In 1881 he is chosen as the first minister of the Liberty Grove Baptist Church. Charles Alexander Taylor dies in on January 7, 1861, at the age of 81.

The war is commemorated in the county in front of the court house in the form of a Civil War soldier who is half Union and half Confederate, reflecting the divided war-time loyalties of Winston County.