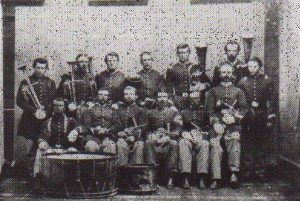 On the West coast, the First Baptist Church of Santa Clara, founded May 14, 1850, has since then longed to build a meeting house. Today, far from the ongoing skirmishes in the vicinity of the Tennessee city of Chattanooga, Santa Clara church members dedicate and celebrate their first facility.

“A brick church building was erected in 1863 on the lot at the corner of Madison and Liberty. The property was donated by Jacob Allen, a member of the Church. The pulpit for the new church was shipped around the Horn from the East Coast. It was delivered to the church by Wells Fargo Express in Mountain View because, apparently, it was a gift from Wells Fargo. Its motif, made of wood and leather, simulated a number of bibles arranged as to make a podium. (The pulpit is on display in the parlor of the present First Baptist Church at 3111 Benton Street). The new building was dedicated on Sunday, September 13, 1863. The dedication sermon was preached by the Reverend D. B. Cheney of San Francisco and the dedication prayer was offered by the Reverend O. B. Stone.”

California plays a role in the war, providing the Union with gold that helps the government finance the enormous expenses associated with fighting the Confederate States of America. In addition, some 17,000 Californians voluntarily travel back east to serve in the Union army.