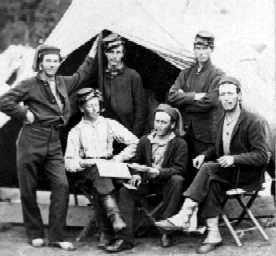 Born in Wayne County, New York, Church moved to Rhode Island as a teenager before settling in Michigan in 1836. There he married Sophronia Benjamin (1823-1911) in 1840. Together they have ten children, seven of which survive childhood. The enterprising Church acquired a large farm, helped establish the town of Ithaca, and from 1857 to 1863 operated a grist and saw mill. Active in the Republican Party, Church in 1856 was elected as Gratiot County’s first treasurer, then was re-elected in 1858. He also was elected as the first treasurer for the Arcada Township.

In addition, and despite a lack of formal education, Church was ordained by the Alma Baptist Church (Michigan), where he was installed as pastor in 1862. Previously, Church had helped organize the first  Sunday school in Gratiot County.

Church’s call to the pastorate comes shortly before he organizes a company with the 26th Michigan Infantry, on July 19, 1862, of which he was commissioned as Captain. During his war-time service, which ends on June 4, 1865, he infrequently fills the pulpit of Alma Baptist.