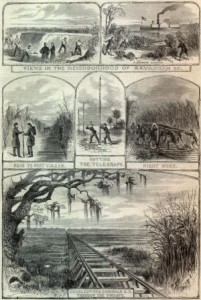 Meanwhile, the harsh winter has diminished food supplies in much of the South, a hardship that today leads some women of Savannah, Georgia to mob local stores and confiscate bacon, flour and rice, among other staples. Order is soon restored, and ultimately only three women are arrested, with no charges pressed. The riot reflects the reality of home front desperation that has descended upon the Confederacy, a condition that will only grow worse in the months to come.

Yet even as many common white folk in Georgia struggle for sustenance, spiritual awakenings provide a sense of higher power, as has been the case in Wayne County, just south of Savannah, in recent weeks. Today’s Georgia Baptist Christian Index carries news of a local church revival in the county:

Bro. Boykin–Please give place in the Christian Index for the benefit of its readers, to the glorious results of a revival at Union church in Wayne county, Ga., commencing on Saturday before the fourth Sabbath of February. This meeting was protracted on Wednesday and Sunday evenings of each week, until Thursday evening before the fourth Sunday in March, from which time it was protracted until Sunday night at 12 o’-clock, during which time, scores of sinners presented themselves for the prayers of the church; out of which number sixty expressed an experimental knowledge of religion–twenty-five of whom have been baptized. God be praised for his mercies, and may he continue his blessings until all persons are made to feel the power of his love.

Physical and spiritual hunger thus characterize the lives of many common Southern whites this month. Of the former there is little relief, but of the latter some find fulfillment in promises of a heavenly afterlife.