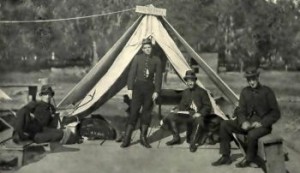 Today, a Monday, the Georgia Baptist Convention reconvenes at Atlanta’s Second Baptist Church for the final day of their annual meeting.

Thus far the war, but more specifically Confederate soldiers and their families, have dominated the discourse of the conference. Today proves no different as, following the opening prayer and a reading of Saturday’s minutes, “Bro. Irwin read a letter from Bro. A. S. Worrel on army missions, usging brethren to come to the army and preach to the soldiers.” Such pleas by now have become a staple of this  year’s assemblage of Georgia Baptists.

Resolved, That seven hundred and five dollars, sent up to the Convention for army missions, without special designation, be appropriated for the support of Bro. J. H. Campbell, army missionary to the soldiers.

Bro. Crawford presented the following preamble and resolution, which were adopted:

Whereas, there is great need of chaplains in the army; and, whereas, quite a respectable number of ministers are known to be in the ranks, both as officers and privates, who would gladly labor for the spiritual interests of the soldiers if they could be allowed to do so: Therefore,

Resolved, That the Baptist State Convention of Georgia appoint a committee of three to memorialize his Excellency President Davis upon this subject of appointing ministers who are serving as soldiers to be chaplains, when, in the opinion of their regiment, their services would be more valuable in the latter capacity than the former.

Following the reading of a letter and an appeal for the support of the largely inactive Foreign Mission Board, conversation again returns to ministry among Confederate soldiers.

The report of the committee on the letter of Gen. Gordan, and similar documents, was read by Bro. Brantly.

Bro. Dickinson [Domestic Mission Board] addressed the Convention on the moral and religious condition and wants of the Virginia army, followed by Bro. Hornady on the same subject.

Bro. Brantly, from the Committee on Preaching, announced that this evening will be spent in devotional exercises on the state of the country.

Bro. Irwin read an interesting letter, addressed to himself, from Gen. Goode Bryan, on the moral condition of his brigade.

Delegates then adjourn for lunch, after which the afternoon session begins with a prayer and then immediately returns to the subject of Confederate soldiers.

The report of the committee on Gen. Gordon’s letter was unanimously adopted.

Bro. Holmes read the report from the Committee on the state of the County. It was unanimously adopted.

The “Report on the State of the Country” thus reads:

After three years’ experience of the hardships and horrors of desolating war waged against us by our unnatural foes, we find ourselves unchanged in our feelings and principles, as respects the endorsement and support of the cause of the Confederate States of America.

While we recognize the hand of God in the reverses of the past year, and acknowledge that the chastisement was justly administered, we take courage from the fact that, to some good extent, these judgments have been sanctified, and that the spirit of prayer and dependence upon the Divine Assistance is more than ever manifest.

In the present condition of our country we find occasion for thankfulness to Him who guides the destiny of nations. From every point the indications are cheering, and hope and confidence swell our bosoms as we contemplate the final result. The gracious influence of Divine truth upon our army, as reported from various sources, is full of encouragement as respects the Divine purpose in regard to our struggling country.

In view of the past and the present, we would call upon our brethren to act with reference to the declaration of the man of God, that is better to trust in the Lord than to put confidence in princes. England and France many continue to deny us their countenance and help in our great extremity, and the nations of the earth may regard with indifference the tremendous struggle that involves our very existence as a nation, but if the God of heaven shall recognize us all well yet be well.

A few minutes later, in one of the final matters of business,

Bro. Brown presented the following as a substitute, which was adopted:

Whereas, there is great need of missionaries in the army, and of ministers to supply destitute churches at home; and, whereas, there are many ordained ministers of the gospel now in the Confederate armies, whose services are desired by regiments, battalions and churches: Therefore, be it

Resolved, by the Georgia Baptist Convention, That a Committee of three be appointed by the President of this Convention to correspond with his Excellency the President of the Confederate States, and request him to pass an order directing the discharge from military service any ordained minister of the gospel whose services are asked by any regiment or separate battalion in service, or by any church as a pastor.

Resolved, further, That this Convention does not approve of the principle of appointing chaplains for the army to be paid out of the public treasury, and we pledge ourselves as a denomination to do all in our power to support all ministers of our denomination discharged and permitted to attend as missionaries upon regiments or battalions which may petition for our services.

Shortly after the reading of this report, the Convention draws to a close, a meeting that has been characterized by some degree of disconnect between delegates’ rhetoric and resolutions on the one hand, and the reality on the ground of Baptist life. A few paragraphs from the “Report on Missions” that delegates adopted speaks to the disconnect.

It is to be regretted that while our churches and individuals have given liberally of their money and means to Army missions, there are so many of our ministers who can rest in comparable peace of mind at home in their churches, while empty seats speak to them of the absence of so large a number of their brethren and members of their congregations, far away on the tented field, lifting up their hands imploring help. It cannot be urged too frequently nor too strongly upon our best pastors and ministers the urgent necessity of offering themselves, either for their whole time, or at least for a part of their time, to break unto the hungry, starving, famished soldiers, the bread of eternal life. Their cry comes up from all quarters, their letters even have reached this body and been listened to with thrilling emotion, come over and help us. The Army missionary field is one of vital importance–SECOND TO NONE, and intimately connected with the interest of the kingdom of God and the success of His cause in the world. The committee would earnestly recommend that our brethren in the ministry should seriously consider the question individually–Does not the Lord of the Harvest call ME into the field to thrust in the sickle and gather in the sheaves?….

Let us listen, dear brethren, to the voices which reach us from the armies of our fellow-citizens gathered in hostile array to check the invader’s march to destroy our property, homes and altars–from every battle field, flowing with the blood of our fathers and brothers–from the graves of our loved ones who have fallen already–from the hospital couches of the sick, wounded and dying–from all quarters….

The loyalty of the white Baptists of Georgia assembled these past four days in Atlanta to the institution of black slavery has been conspicuously on display from beginning to end, evidenced alternatively in code words and silence. The “property” the assembled Georgia Baptists vow to protect is first and foremost slaves, who are the most financially valuable assets of white Southerners. In addition, white Georgia Baptists’ wholehearted “endorsement and support of the cause of the Confederate States of America” is a phrase referring to white supremacy and black slavery. Unnecessary is the actual use of the words “slave” or “slavery,” terms which are noticeably absent from the entirety of the formal minutes of the conference. Imperative is the need of white Baptists to support Confederate soldiers, the protectors of black slavery and the bulwark against abolitionism. Absent is any concern with meeting the spiritual needs of enslaved blacks.

While Georgia Baptists wrap up their conference today, the one year anniversary of Richmond, Virginia’s Male Orphan Association is observed at the city’s Second Baptist Church, reflecting the widespread concern of white Southern Baptists for the children of deceased soldiers.

Finally, to the disappointment of Georgia Baptists, Jefferson Davis in the weeks and months to come does not grant Georgia Baptists’ request to allow ordained ministers in the army to be appointed as chaplains or pastors, noting that the Confederacy cannot spare men from the ranks of soldiers.