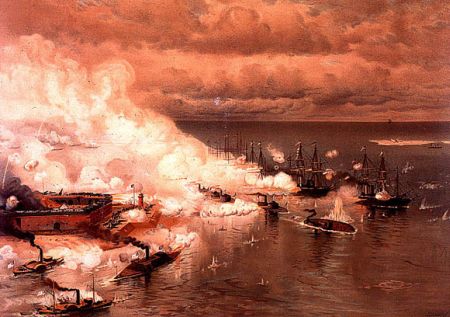 The Union Navy, in an effort to close Alabama’s Mobile Bay to blockade runners, on August 3 landed 1,500 troops on Dauphin Island and began a siege of Fort Gaines. Confederate defenders have been trying to hold off the Union forces in order to allow time for reinforcements to arrive.

Today, however, the Union Navy advances into Mobile Bay with a strong show of force. A fleet of eighteen warships, commanded by Rear Adm. David G. Farragut, enters the bay, with four ironclads in the lead. Enduring blistering fire from Forts Gaines and Morgan, the fleet successfully clears the forts’ firing range and a minefield and then engages Confederate naval vessels. Quickly dispatching all but one of the inferior Rebel vessels, the Union ships eventually subdue the remaining enemy ship, the ironclad CSS Tennessee.

With the destruction of the Confederate naval force stationed in Mobile Bay, followed by the surrender of the three Confederate forts in the area in the days following, the Union seizes control of the entirety of the lower Mobile Bay. Although Union forces do not attack the city of Mobile, the port of Mobile is subsequently shut down, delivering yet another economic and military blow to the Confederacy.

Meanwhile, in Virginia, another beleaguered Confederate state, Baptists from the Middle District Association are convened for their annual gathering. The war is on the minds of all present.

As reported by the Richmond Daily Dispatch this day:

Rev. Mr. Dickinson spoke in behalf of the orphans of deceased soldiers, and raised a large sum–Mr. W. B. Chalkley headed the amount with a donation of $500. Two per sons agreed to adopt each an orphan and provide for its maintenance and education.

The meeting is a very pleasant one and is largely attended. To day several interesting subjects will be discussed.

Virtually every Baptist gathering–regional, statewide, national–in the Confederacy this year focuses on the need to minister to the orphans of deceased soldiers, indicative of the ill fortunes of a bleeding Confederate nation.