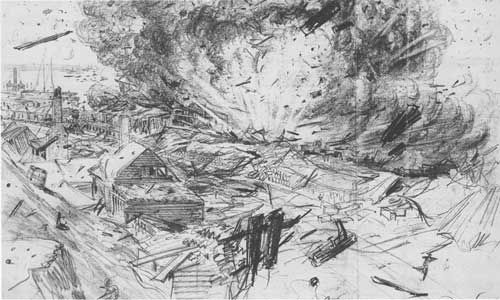 Today an enormous explosion rocks City Point, Virginia, the headquarters of the Union Army during the current siege of Petersburg. Several large buildings, 180 feet of wharf, and some two million dollars worth of military munitions and supplies are destroyed, while more than forty workers lose their lives.

Union General Ulysses S. Grant quarters are damaged, but the general is uninjured. One of his staff officers, however, suffers wounds and an orderly is killed.

Confederate operative John Maxwell is the man behind the deadly disturbance. Earlier in the day Maxwell had managed to plant a “horological torpedo,” in effect a time bomb, on a docked munitions barge.

The attack on City Point causes the Union Army to exercise more caution, but does nothing to deter the siege of nearby Petersburg.

Meanwhile, this week’s North Carolina Baptist Biblical Recorder offers readers a current rundown of “Various Things” related to the war, including the following:

REV. R. B. C. HOWELL–Rev. Dr. Howell of Nashville, having been ejected from his house of worship by the Yankee military authorities, is preaching in the theatre, the use of which, without charge, was tendered him by the proprietor. He is also publishing, in the Western Recorder a series of sermons on “The Christology of the Pentateuch.”

INSANITY CAUSED BY THE WAR–Dr. Kirkbridge, in his report of the Pennsylvania Insane Asylum, records an enormous increase of female patients, rendered insane by the loss of relatives in the war.

HATING SOUTHERN CHRISTIANS–Says one of our exchanges: “So far as we can judge from the history of the past, nothing Southern escapes the wrath of our enemies. Yet we have thought there was a special hatred manifested towards the religious sentiments, and feelings of Southern Christians. Yankee spite has been especially vented upon our Churches. Scarcely a house of worship which has fallen in the route of the vandals of the North, that has not been either desecrated or destroyed. Christian ministers among us have been the objects of special hate, and the time may come when our religious principles may be put to the test by fire and sword.”

BAPTIST CHURCHES IN THE ARMY–A Baptist church of 65 members has been organized in Finley’s brigade, army of Tennessee, and another of more than 40 members in Gibson’s. We believe this to be the best plan for keeping alive in the minds of the soldiers, a sense of their personal accountability and for promoting their spiritual welfare. It is the best, because it is the Bible plan for training and disciplining believers.

SPURGEON IN FAVOR OF THE SOUTH–In a private letter just received from Elder T. E. Skinner, who, as our readers are aware, is now in England, he says: “Spurgeon visited our town, Leamington, on the 8th of June, and preached two sermons.–He is much run after, and is a wonder in the eyes of all godly people. He dined with a friend of mine and, at the table, declared himself a thorough Confederate. When I am introduced as a brother minister from North Carolina, he grasped my hand very cordially and said, “I am pleased to see you. May God establish you and your people. They deserve their independence.”

The Spurgeon story, however, is a bit suspect, as the great English preacher is a vocal and public opponent of slavery and critic of the South. Due to his strong abolitionist views, Spurgeon’s works have been censored in the Confederacy for the entirety of the war. Elder T. E. Skinner’s account, however, indicates that the South would like to be able to claim Spurgeon as a religious ally.