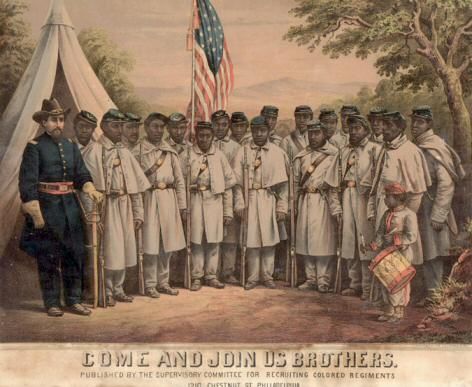 This week the 118th United States Colored Troops regiment is forming in Kentucky. Many former slaves enroll today in Owensboro, eager to take up arms to help put down the Rebellion and free the remaining slaves in the Confederacy.

Former slaves are now daily enrolling in the Union Army, and in so doing are ensuring that the United States’ military supremacy continues to steadily grow. Their actions also give a lie to the public rhetoric, emanating from within the Confederacy, that blacks are content and happy as slaves.

Even as many white Southerners, including Baptists, remain insistent that slavery is the will of God for blacks, some criticize Southern ministers who talk too much of the war to defend African slavery.

An article in today’s North Carolina Baptist Biblical Recorder echoes the Virginia Baptist Religious Herald in criticizing ministers who talk too much of the war, and too little of the gospels.

The Religious Herald thus exposes a species of ministerial dereliction, which may not be confined to Virginia.

A brother, from a distant portion of the State informs us that his place of residence makes it convenient for a number of ministers to pay him frequent visits. The war and the finances constitute their staple of conversation. None of them ever addresses to the members of his family a word on the vital truths of Christianity, or the paramount claims of personal religion.

This picture, we would fain hope, is overcharged. But if it be true to the life, and if ministers generally have in like manner suffered the gospel to die out from their intercourse with men, what marvel that a brother in a different section of the State, should represent the church to which he belongs as “dead–dead–dead!”

The gospel in the pulpit only never made a vigorous church, and never will. It must enter into the family–must speak by the fireside–must interfuse itself with the social communication of hearts–must be the potential element in the action and reaction of character in private life. There is manifest official backsliding on the part of pastors, where this is wanting.

Let all who minister in holy things then, ask themselves whether that brother has sketched their portrait; and if so, whether there was no personal backsliding which went before and brought about this state of things?