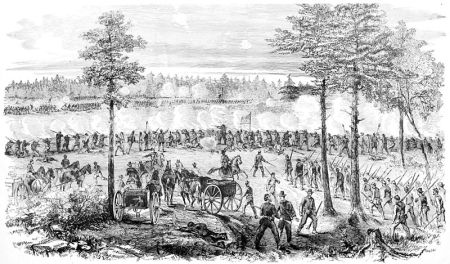 “The Siege of Petersburg–Battle of Ream’s Station-The Attempt of the Enemy to Regain the Weldon railroad on the evening of August 25th, 1864” showing the “repulse of the final confederate assault” according to the accompanying text. From Frank Leslie’s Scenes and Portraits of the Civil War (1894)

Today near Petersburg, Virginia, a Confederate offensive temporarily brings a halt to Union destruction of the Weldon Railroad near Ream’s Station, in what becomes known as the Second Battle of Ream’s Station.

Meanwhile, this week’s North Carolina Baptist Biblical Recorder reports on “Various Things” war-related and not. Self-delusion and wishful thinking, commodities yet common among many white Southern Baptists, are woven a number of the short pieces, mixed with sobering reality and spiritual themes.

INVENTING SINS–The inventive genius of the Yankee race is wonderful. Among other things they have made a number of new sins for the Confederates. Says the Christian Observer: “The sin of slavery!” invented by our enemies many years ago has become a cant phrase. To this they have added “the sin of Rebellion,” charged against those who maintain the doctrines affirmed in the Declaration of ’76. Dr. Horace Bushnell has added another sin to the list. He teaches that to vote against the Federal Administration in times like the present is “the crime of faction!”

AN EXPENSIVE BUSINESS:–The New York Herald says: “That for every nigger made free by Lincoln’s war a white man has died and $5,000 spent. And after all, one-fourth of the freed negroes have perished already by famine, disease and bullets. The Herald asks what will be left of the North if they go on at that rate till the whole four millions are freed.”

EDUCATION OF DISABLED SOLDIERS:–The South Western Baptist recommends that Howard College, Alabama, now suspended and the buildings used for hospital purposes, be appropriated, with the interest of the endowment fund, to the education of young soldiers who have been maimed in the war, so as to be unable to pursue any manual labor.

RELIGION IN TENNESSEE:–A Baptist minister of Tennessee, who has been cut off from communication with his brethren of the South for two years, writes to the S. W. Baptist: “The state of religious feeling in this  portion of Tennessee has been very good, and indeed continues so. Christians are greatly humbled at the afflictive providence that has so desolated the country and brought so much suffering and sorrow to so many homes. During the past fall, under my ministry we enjoyed one of the most remarkable revival seasons I ever witnessed. There were [?] three churches where meetings were held, about  one hundred and fifty conversions out of a population where all men capable of military services were gone. I baptized eighty into the fellowship of the churches.”

SAVED BY PRAYER:–We quote from the Christian Sun: “When the siege of Petersburg shall have been raised, and our troubles are past, all will feel that we have been saved by prayer. The skill of our Generals and the valor of our soldiers have done much. God has made them instruments in his hands to protect and deliver us. But Petersburg should feel, and will feel, that deliverance has come through the intercession of the people of God. We have been saved by prayer. To God let the praise of our protection thus far be given, and ere long we will all rejoice in full deliverance.”

A LIBERAL OFFER:–Says the Milton Chronicle: “Mr. Joseph J. Yarbrough, who lives a few miles from this place, proposes to join any give gentlemen in contributing fifty bushels each of grain, for the use of the poor in this section of the country. He proposes that the grain be deposited at some mill, to be selected by the donors, for distribution in such a manner as shall be agreed upon.” How such a spirit, if universally prevalent in the Confederacy, would mitigate the sufferings of the war and bear us triumphantly through it.

WAKE FOREST COLLEGE:–We have hitherto neglected to state that the grounds and buildings of Wake Forest College have been taken by the military authorities for hospital purposes. The female school at that place, under the care of Professors Royall and Simmons, is of course suspended.

INSTRUMENTAL MUSIC:–Our Methodist Exchanges are gravely and earnestly discussing the scripturalness and expediency of using instrumental music in public worship.