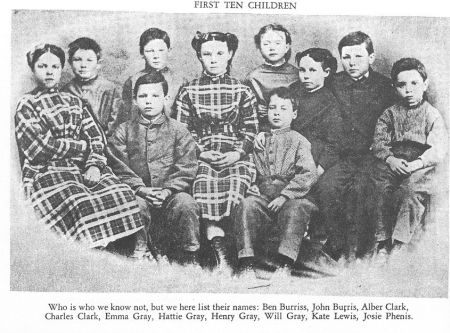 The Indiana Soldiers’ and Sailors’ Children’s Home, founded in 1865.

The number of orphans, growing rapidly, is overwhelming cities and towns of the Confederacy. In Baptist state convention and area associational meetings throughout the South, resolutions have been passed expressing support for the care of orphans. However, Baptists have thus far been unable to unite on a program of orphan support. In many instances, unable to agree on a denominational method of support, they do nothing, instead calling upon the government to provide orphanages. In at least one instance, Baptists are collecting funds to send orphans to existing schools, many of which are religious.

As their State Convention, the Baptists of Georgia made a notable beginning in their contemplated design of educating the orphans of deceased Georgia soldiers; but while, as far as the public is aware, their efforts have been altogether discontinued and the noble enterprise permitted to languish in temporary neglect, the Virginia Baptists, whose State has been overrun far more than Georgia, and whose resources and energies have been taxed ten-fold more than ours, have entered upon this exalted undertaking and made commendable progress. Their General Association, which convened after the session of our Convention, catching the fire which was struck forth from the patriotic minds of Georgia and Alabama, resolved to essay the education of soldiers’ orphans as an act of justice and an [?] of Virginia’s soil who have yielded or might yield their life a sacrifice upon the altar of patriotism. A Committee was appointed to consider the matter; and they were also empowered to adopt some provisional plan of operations for twelve months, if they deemed it necessary and proper. This course they, upon consultation, determined to pursue; and so, without waiting to raise a huge sum and purchase or build a vast seminary, the brethren of that Committee, with characteristic energy and good sense, began to operate at once, in a manner that avoids all delay and bestows the advantages intended at the very time they are most needed. That manner consists in collecting money and devoting it solely to the maintenance and education of orphan children, in the schools present existing. The funds contributed by a particular county or section, are dedicated to the education of the orphans of that section; and the schools most convenient to the residence of the children are patronized. Already have poor and illiterate orphans been placed under the instruction of competent teachers; thus, in the educational welfare of our young population, avoiding the objectionable hiatus, which, if it should be continued for any considerable time, would prove so detrimental to the highest interests of our Confederacy…

Although taking action, Virginia Baptists do so only on a temporary basis at this time.

Within this editorial is a hint that the war is fought mainly by poor soldiers. Now, with many tens of thousands dead, the poor orphans of impoverished soldier families present a dilemma for church and state alike.

In the North, by way of contrast, Baptists and government have more resources to support the orphans of soldiers. Even now, multiple plans are underway for the housing and education of orphans.