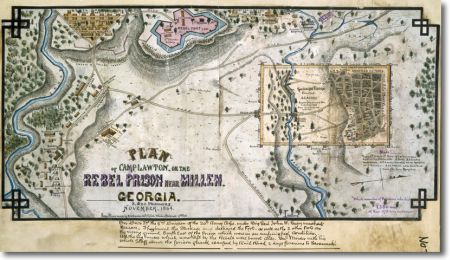 Today Sherman’s left (northernmost) wing arrives at Camp Lawton near Millen, a prison of war compound. Intent on liberating Union prisoners, the Federals are angered to learn that Confederate military officials have moved the camp’s prisoners southward to Thomas County.

The Union soldiers express their displeasure by burning the local depot and a hotel in Millen.

Georgia is not the only state where military action takes place this day. While Union and Confederate forces in Virginia are primarily engaged in trench warfare–albeit now in winter camp–near Petersburg, some Federal cavalry range the countryside in an attempt to further soften Rebel defenses and local resistance.

Part of the Federal’s strategy is to confiscate or destroy food stocks that might otherwise prove useful to hungry Confederate soldiers.

The presence of the Federals this Sunday hinders scheduled church services at the Ketoctin Baptist Church of Loudoun County, Virginia, as noted in church records.

No congregation or preaching [be]cause some of the Federal cavalry were in the settlement or rather county Tuesday, Wednesday, and Thursday.   Burnt nearly all our barns with their contents, much corn, all the wheat, oats, hay and straw they could find, many out buildings and fencing besides several valuable dwelling houses with their contents and robbing many others.  They also drove off all the horses, cattle, and sheep they loss to that part of the county where they made their depredations of from two to three millions of dollars.  Therefore each and every person had as much as they could do on Friday and Saturday to get things in some kind of order . . .