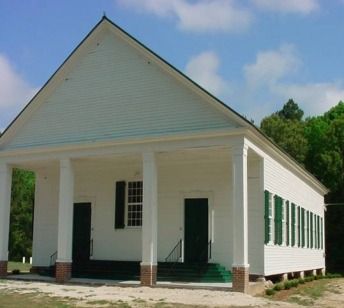 Nearly a month after leaving Atlanta, today General William T. Sherman and his army reach the Georgia coast. The March to the Sea is over.

His men exhausted and the army low on supplies, Sherman directs a contingent of officers to contact Union supply ships that should be nearby.

While awaiting a rendezvous with naval forces, rest is in order. Soon enough, the attack upon Savannah will commence. Fortified, surrounded by flooded rice fields and manned by some 10,000 Confederates, the coastal port city is far more formidable than any of the cities Sherman has encountered since departing Atlanta. Yet with a 6-to-1 advantage in manpower, the Union general is confident that he can overtake the city before Christmas day.

While the Federals rest and look forward to marching upon Savannah, certain Baptists fume in Sherman’s wake.

A mixture of defiance, indignation and resignation seems to characterize the white members of Bark Camp Baptist Church of Midville, Georgia, near Savannah (black members vastly outnumber whites, a situation not at all unusual in Georgia’s coastal areas before and during the war). The Bark Camp church is not the first that the presence of Sherman’s raiders has disrupted, replete with the temporary confiscation of the meeting house. Like some other congregations days and weeks prior in Sherman’s path, Bark Camp Baptists indignantly pen a protest this day:

This was the regular day for conference but owing to General William T. Sherman’s Yankee Raid there was no meeting of pastors or members.  We as members of Bark Camp Church do hereby place on record our solemn protest; also our thorough contempt for the vandals who desecrated our church.  We are willing to leave the issue in God’s hands and fervently pray that the time will come when we can worship our God under our own fig tree and have none to make us afraid.   –W.H. Davis, Moderator

Fear, for generations woven into the daily fabric for Southern slaves, is a new and rather unpleasant feeling for many white Baptists of Georgia.

Sherman, it seems, has thus far done his job well.