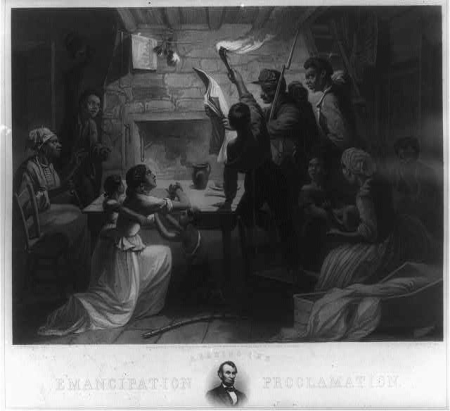 As the year draws to a close, Sherman eyes the Carolinas, the Confederacy prays for a miracle, and newly freed blacks in Georgia celebrate the miracle of their freedom.

General William T. Sherman, having successfully captured Savannah, contemplates marching on nearby Charleston, the city that more than any other fostered Southern secession and then led the South into war.

Many Charlestonians, correctly gauging Sherman’s intent, face the coming new year with trepidation. Georgians, having already witnessed the devastation and destruction wrought by Sherman’s armies in their state, face another gloomy year. Richmonders in Virginia carry on as usual, but beneath the outward confidence lurks a growing fear that Lee might not be able to prevent Union forces from sweeping into the Confederate capital.

Savannah, on the other hand, bears the distinction of evidencing both great fear and seemingly unbounded jubilation. Many white citizens of Savannah accept the loss of Savannah to Sherman and have conceded the war as a whole, sad realizations that are often edged with a fear of what a future South looks like apart from slave labor.

Black citizens of Savannah, however, end the year by praising God for their earthly salvation. Black churches this night are filled with joy as never before. Generations longed for freedom from bondage, and now God has come to the deliverance of His oppressed people. This third year of December 31 watch nights–the first being in 1862 in anticipation of the imminent signing of the Emancipation Proclamation by U.S. President Abraham Lincoln–is filled with song, worship and celebration in Savannah and other Union-controlled areas of the South as well as in the North. Tens of thousands of slaves have been liberated in 1864 alone. Freedom is evidenced on many fronts: serving in the Union Army, learning to read and write, training in trade skills, acquiring lands from the government on which to live and support themselves, freely worshiping and praising God apart from white overseers.

The year thus closes with race-based liberty in tatters, while the freedom for all envisioned by America’s founders has finally transitioned from a long winter’s hibernation to a vibrant spring day of joyful newness and flowering hope.