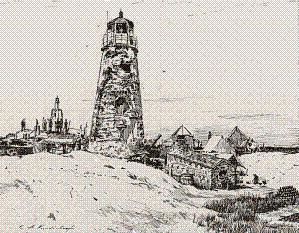 The lighthouse at Fort Morgan, a landmark for Confederate blockade runners

Now blanketed by the chill of winter, anxiety courses through the veins of the Confederacy in the wake of many months of military setbacks.

Government officials hope that the coming spring months will witness a curtailing of army desertions. Perhaps the revivals taking place in army camps will steel the South’s defenders to once again bravely stare into the abyss of death, confident that the cause of the Confederacy is the cause of God.

Yet for white Baptist civilians of the South and many others, loyalties are increasingly divided. The Upper South is fragmenting, with many citizens, weary of the long, hard war, enticed by U.S. President Abraham Lincoln‘s offer of pardon and amnesty. More dependent on black slavery for her riches, the Deep South, by way of contrast, is no less caustic than before in denouncement of Northern overtures.

Meanwhile, enslaved black Baptists of the South, convinced God is on their side, pray ever more fervently and confidently for liberation and, when opportunity arises, are quick to slip away to the safety and freedom of Union lines.

While temporarily halted by winter, the steady progression of Union forces southward makes central and south Alabama more vulnerable with each passing day. Two years ago federal forces first breached north Alabama. The coming of spring, many Alabamians fear, will witness a Union assault southward and endanger the port city of Mobile, from which Confederate blockade runners yet operate.

Today, however, brings some good news in Alabama for the Confederacy, as reported by the Mobile Register:

The Steamer Denbigh.- We are glad to learn that this steamer, reported to be ashore and a wreck in her late attempt to run out of this port in a fog, is not damaged to the extent supposed. She has been relieved of her cargo and is now afloat, and is expected up to-day. The enemy’s fleet discovering her unfortunate position tried to vent their spite upon her. They succeeded in hitting her but once in her wheelhouse, doing her no damage. She was defended by the guns of Fort Morgan, which succeeded in putting three shots in one of the blockaders and driving the rest off. The enemy’s ship that was struck was sent off in the direction of Pensacola, supposed to be disabled. The energy of Gen. Higgins and his command in defending the unfortunate ship is highly commended.

On the other hand, the Dadeville Banner and Times in central Alabama scolds the Baptist women in this town north of Auburn for not doing enough to support their husbands, sons and brothers serving in the Confederate Army:

Who is it that keeps the invaders from your homes?  Who is it that watches with eager eye, and checks every advance of a merciless foe, through the sultry Summer’s day, and the bleak and cheerless Winter night?  Who bars his breast against danger, and with his body forms a mighty bulwark of safety to your life, liberty and property?  In a word, to whom are you indebted for every privilege and immunity you now enjoy?  You answer to the solder—Then do you owe him any thing?  If you answer yes, then do your actions seem to belie your words; for how much have you given to add to his comfort?  What would you take for your life?  How much is your honor worth to you?  How much property have you?  The soldier is defending all these.  One breath from the despot Lincoln would sweep these from your possession, were it not for the soldier.

Yonder on the border is a fresh grave, and in it sleeps a gallant soldier—Through many a hard-fought battle he has passed unscathed the leaden missiles of death.  One month ago he was buoyant and happy, dreaming of his blessed home, and you his loved friend.  But, alas!  Two weeks ago he was placed on the out post to keep watch, and to walk the cold weary round of the midnight sentinel.  Look at him as he treads his round to and fro.

“The dead leaves strew the forest walk.
And withered are the pale, white flowers;
The frost hangs black’ning on the stalk.
The drew drops fall in frozen showers.”

But he is barefooted!  Beneath his feet, is frozen cold and hard the icy ground.  He wears no over coat!  Do you hear the sighing of the wintry winds?  See now it is snowing! Still the sentinel walks back and forth, ever watchful, though every step he leaves his barefoot print upon the snow.  A smile ever and anon radiates his countenance; it is then he is thinking of you.  He loves you, and when he grows despondent, the thought of you reminds him, that there is one to love him, one to love, one to fight for; and this thought serves his relaxed system, and again he braces himself against the howling winds and cold, damp ground.  Thus he passes the dreary night.  But see him early the next morn.  He is pale and care worn!  At mid day he has a hacking cough; at eve he is prostrated with the pneumonia.  View him two days after.  He is dying!  Oh, now he is dead!  He died of cold, stern, sinful neglect.—Where was [sic] you when he was standing guard that cold night on the frontier?  Snugly housed from pelting, pitiless storms, wrapped beneath your blankets and quilts, sleeping unconscious, yea, thoughtless of his exposures.  Do you not shudder when you think of it?—One pair of socks might have saved him.  Are not the ladies of Dadeville and community as patriotic as those at other places?  We believe they are.  We recommend that they meet at the Baptist church at 10 o’clock A. M., on Saturday next, and organize themselves into a “Ladies’ Aid Society,” and do all they can to relieve the sufferings of our brave soldiers.  We have presumed all that was necessary, was but for some one to lead in this matter, and we have taken upon ourselves to propose said meeting.

We will take great pleasure in doing all we can to aid such a Society, and will be happy to publish their proceedings gratis; not only this, but we are willing to lend our purses too.